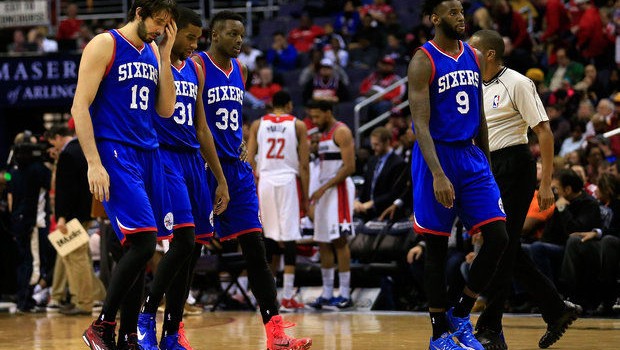 For the Sixers, Martin Luther King Day was a chance to show off their newfound confidence inspired by a 3-3 record in their last six games.

But, the Washington Wizards, one of the Eastern Conference’s best teams, turned it into another Monday, Monday, drubbing the Sixers 111-76 at Verizon Center.

“It was one of those games where you stepped back and thought, `We really have a young team,”‘ a reeling coach Brett Brown said.

Philly ended the first half of the NBA season with an 8-33 record, and while that’s bad, it’s not the worst mark in the league. The New York Knicks began the day with just five wins, and the two teams play at the Wells on Wednesday.

“I live in probably a naive world,” Brown said. “I really think we’re going to win and steal wins, every time we play, and the team allows me to think because they have spirited practices, real video sessions, fantastic team meetings. They try to prepare.”

The Wizards ended the game quickly. Washington went on a 20-3 run for a 27-11 lead late in the first quarter and coasted to the win.

After closing the gap to 16 points with three minutes to play in the third quarter, the Sixers allowed the Wizards to score14 straight for an 85-55 lead just before the end of the period.

Washington had seven players in double figures. Marcin Gortat scored 20 and John Wall had 11 points and 10 assists. Kevin Seraphin, who played most of his minutes after the game was decided, had 14.

“Playing a team like that is really dangerous. There is no pressure on them. They play freely. Guys on our team could underestimate them, but we did a great job,” Gortat said.

“Not being cocky, but they were just smaller guys over there, not really experienced,” he said.

The Sixers were led by Henry Sims with 13.