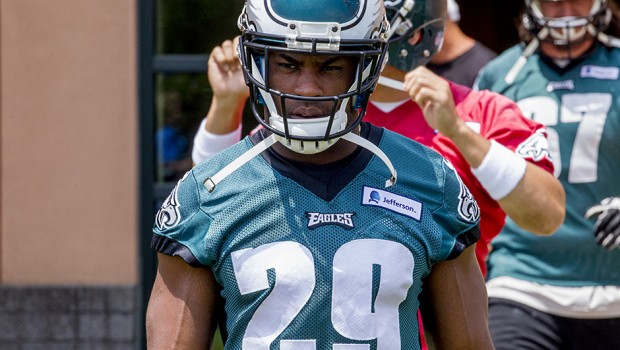 There’s a lot of hot air coming out of Dallas these days as the Cowboys prepare to defend their NFC East title.

And I’m not buying it!

Dallas came out of nowhere last year to finish 12-4 and make the playoffs for the first time in five seasons. That turnaround has many thinking the Cowboys will repeat as NFC East champions, but the numbers aren’t quite so optimistic.

Dallas’ game plan for replacing DeMarco Murray, now an Eagle, is to use a running-back-by-committee-approach, splitting the workload between Joseph Randle, Darren McFadden and Lance Dunbar.

That sounds great in theory, but one of the reasons the Cowboys rushing game worked so well last season is Murray was able to post an 8.9 GBYPA on 160 good blocking rush attempts.

That volume of carries is highly important, as no other running back had more than 126 good blocking carries last year — a testament to Dallas’ terrific offensive line. But the Cowboys still need a RB who can take advantage of available rushing lanes.

Last season, Randle racked up a 12.6 GBYPA. That total would seem indicate he can keep up the production level, but it occurred on only 18 good blocking rush attempts. McFadden and Dunbar both fell drastically short of Murray’s GBYPA total, with 6.9 and 6.6 totals, respectively.

So unless Randle is able to replicate his GBYPA with a much higher carry volume — or McFadden/Dunbar improve drastically — this rushing attack will take a step backward in 2015.

The Cowboys led the league in time of possession last season (32:50), a stat that helped Dallas protect its subpar secondary. This was a main reason the Cowboys had only two games where they allowed 30 or more points, a total that tied for second best in the league.

But if the Cowboys aren’t able to run the ball as well, you’d have to assume their ability to control the clock will suffer, too. I’d expect a defensive performance closer to 2013, when Dallas’ had seven games of 30-plus points allowed, tied for second-worst in the league.

The Cowboys have a schedule full of opponents with high-powered passing attacks — two games against the Giants and Eagles, plus contests against Atlanta, Miami and Green Bay. In fact, with Washington, Tampa Bay, Carolina Buffalo and the New York Jets also on the docket, Dallas might face more upper-tier wide receivers than any team this year.

All of this is to say the Cowboys are going to have to win shootouts early and often to stay in playoff contention. And Dallas hasn’t fared so well in such situations in the last. Remember 2013, when they allowed 30-plus points seven times? They lost six of those games. If that becomes a more frequent occurrence this season, the Cowboys will have trouble repeating as NFC East champs.