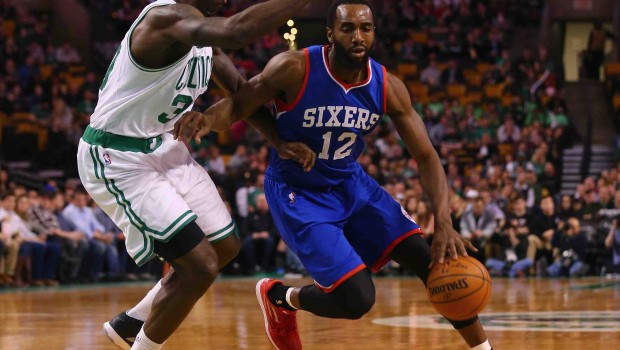 If the newly confident Sixers, who had won three of their six games, had any heightened expectations because of their recent successes, they were dashed last night in Boston.

And they also found out how much guard Michael Carter-Williams means to this young team.

Sullinger was back in the starting lineup after being yanked the previous two home games for arriving late to the arena for pregame activities.

Luc Mbah a Moute (photo above) led the 76ers with 18 points, while Hollis Thompson and Robert Covington had 16 apiece. It was the Sixers’ eighth straight road loss.

Boston has won all three meetings with the 76ers this season by double digits.

With the Sixers missing Carter-Williams, their top player and only true point guard, with a right toe injury, Boston jumped out to a 26-point lead midway through the second quarter before Philly used a big third period to close the gap to six.

Trailing 70-49 midway through the third quarter, Philly took advantage of Boston’s ice-cold shooting and rallied to make it 83-80 on Thompson’s 3-pointer with 7 1/2 minutes to play.

But the Celtics took charge with an 8-0 run — the final points coming on Sullinger’s three-point play with 5 1/2 minutes left.

Boston scored the initial nine points of the game — with Bradley getting the first seven — and opened a double-digit lead just 6 1/2 minutes in.

At times, Boston was practically toying with the 76ers, passing the ball around the perimeter a couple of times before taking uncontested jumpers or scoring on easy drives to the basket.

The Celtics pushed it to 70-49 before the Sixers closed the third quarter with a 20-5 run, slicing the deficit to single digits for the first time since the opening minutes. Boston led 75-69 after three.