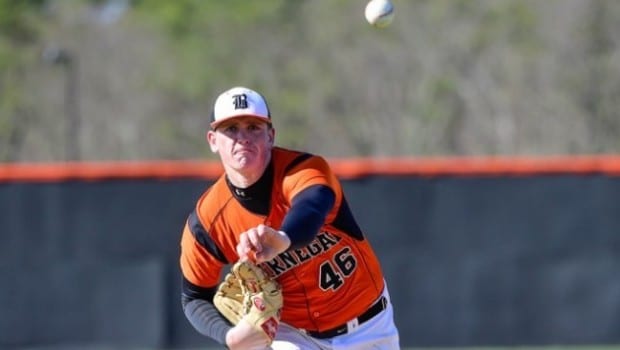 WITH TOP DRAFT PICK, PHILLIES MAY GO FOR A JERSEY SHORE GUY!

Fourteen days before the Sixers exercise their top pick in the NBA draft, the Phillies have the No. 1 pick in the June 9 MLB draft.

System weakness: The Phillies have almost no left-handed pitching prospects aside from little lefty Elniery Garcia, whose stuff is mediocre.

Jason Groome (above), LHP, Barnegat (New Jersey) HS: Groome is the best player in the class talent-wise, but it’s justifiable for the Phillies to look elsewhere given how risky high school arms can be.

Corey Ray, OF, Louisville: Ray has hit everywhere and against everyone, including for Team USA, and while his tools are exciting in a vacuum, they aren’t sexy for a top pick. Florida LHP A.J. Puk has big stuff and is perceived as safe because he’s in college, but he has had back issues, has performed inconsistently and isn’t particularly athletic.

Joey Wentz, LHP, Shawnee Mission East HS (Prairie Village, Kansas): If the Phillies know they can sign the top pick for $7 million — Swanson got $6.5 million last year — then they’d have a $2 million surplus on their hands to buy back a slipped prospect at their next pick at 42. That’s a long way down, especially considering the shifty Braves, Reds, Padres and Cardinals all have multiple picks between Nos. 1 and 42. But if one of the top prep arms falls a bit, the Phillies could offer top-15 money at 42 without breaking a sweat. Wentz would be a coup there.