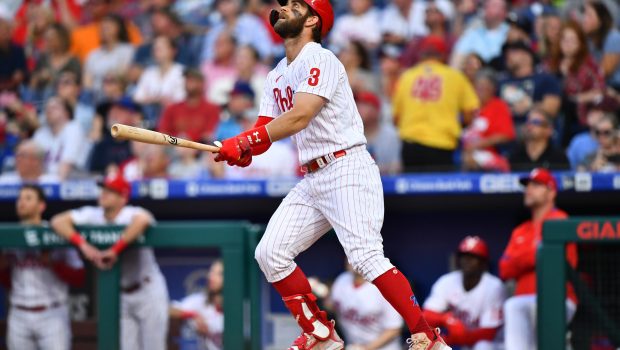 WITH TATIS INJURED, PHILS HARPER HAS A REAL SHOT AT MVP!

The Phils Bryce Harper was a 50-1 shot for NL MVP a week ago.

Today he’s 4-1, and considering Pads shortstop Fernando Tatis Jr., the Vegas fave, is hurt, Harper may be considered the frontrunner.

Tatis remains the clear favorite with -110, Dodgers slugger Max Muncy slots right behind Harper at +450 and another former National Trea Turner has the fourth-best odds at +650. In spite of Turner having an under-the-radar stellar season prior to being traded to the Dodgers, no player has ever won the NL MVP after switching teams.

Harper and the Phillies have lost just once since the July 30 deadline and are coming off clean sweeps of both the Nationals and Mets. Philadelphia is now up two games on the second-place Braves in the NL East while Harper’s stock continues to rise.

On July 20, Tatis partially dislocated his left shoulder on a slide to third base against the Rockies, the third time Tatis left a game with the injury, and the second time he was placed on the Injured List. Tatis remains on the IL but recently said he is definitely coming back this season. As Harper’s biggest hurdle to the award, Tatis leads the NL in homers (31) and stolen bases (23).