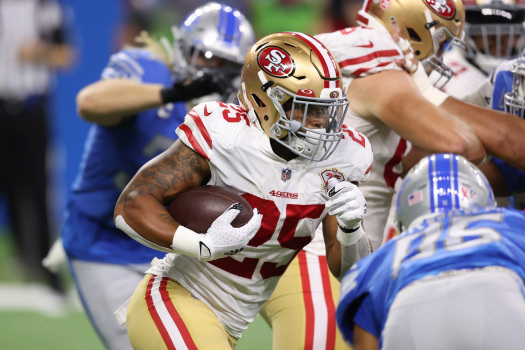 WITH RAHEEM MOSTERT OUT, EAGLES MUST STOP RB ELIJAH MITCHELL

The Niners’ offense was dealt a blow with running back Raheem Mostert suffering a knee injury early on in the season opener.

And now Mostert will be out for the season after electing to undergo surgery.

Starting quarterback Jimmy Garoppolo noted how unfortunate it is for the team to lose Mostert after just two carries for 20 yards in Week One.

“With Raheem, it really sucks — it does. There’s no way around it,” Garoppolo said, via NBCSportsBayArea.com.

“It’s one of those tough breaks for him. Just getting started, off to a hot start like that, and then you lose him. So we’re going to miss him.”

But the 49ers displayed that they can be just fine with the next man up. Elijah Mitchell came in and rushed for 104 yards with a touchdown in the 41-33 victory. The 49ers also have JaMycal Hasty and Trey Sermon on their roster at running back.

“The young guys — like Elijah did in the game and Hasty, I’ve seen it last year with Hasty, he’s always ready to roll. He’s a gamer,” Garoppolo said. “And then we’ll bring Trey along, get him ready for this week. I mean, they’re a good group — they really are. They complement each other well. It’s a little bit different take with each one of them, they each have their own style of doing it. But it’s all effective. And I think with the O-line we’ve got, tight ends, fullbacks, and receivers blocking, it makes for a good group.”

The 49ers have always run the ball well under head coach Kyle Shanahan and there’s no reason to think the 2021 season will be any different, even without Mostert. With a system so friendly to running backs, Mitchell — a sixth-round pick this year — could easily become a 1,000-yard rusher as a rookie.