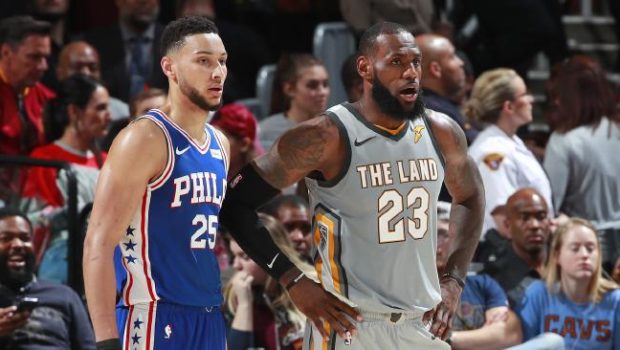 WITH LEBRON, SIXERS HAVE 57% CHANCE OF TITLE WITHIN 4 YEARS!

The Sixers don’t offer James the best odds of winning a title during his next contract, nor do they provide his best narrative potential.

But the Sixers are the team with the best mix of both factors — and that’s why, out of all 30 possible destinations, Philly should be LeBron’s next home.

The Sixers have an unmatched base of budding talent in center Joel Embiid and point guard Ben Simmons — the closest thing the NBA has to the Orlando Magic’s Shaquille O’Neal/Penny Hardaway tandem of yesteryear.

They also boast improving young forward Dario Saric, 2017 No. 1 overall pick Markelle Fultz and unsung supporting star (at least, in the eyes of the advanced metrics) Robert Covington. And Philly has the cap space to sign James outright if it can find a taker for Jerryd Bayless’s expiring contract and perhaps either Justin Anderson or Richaun Holmes in related trades. So to bring LeBron aboard, it wouldn’t have to gut its entire roster (but would probably have to sacrifice pending free-agent shooter JJ Redick).

The Sixers also have a strong narrative argument to present The King. Philly ranks among the league’s most historic franchises, having won the third-most games of any NBA club ever (trailing only the Celtics and Lakers). Yet LeBron would be no bandwagon-jumper if he signed there — the team hasn’t won an NBA title since 1983, when another former MVP (Moses Malone) joined forces with Julius Erving and company to win a championship. According to our straw poll, Philadelphia had the fourth-best legacy-building potential for LeBron of any team in the league, in addition to the third-best championship potential. For our money, that’s a difficult combo to beat.

Yes, there are real concerns about how Simmons, a ball-dominant point guard who literally never shoots 3-pointers, would coexist with James, who has tended to run his own show with the ball (and who had to work years torefine his shooting touch). Fultz was a mess most of his rookie season, Embiid has a long history of injuries (plus his personality is an acquired taste), and the team is rolling with coach Brett Brown as GM right now, after Bryan Colangelo resigned amid a scandal involving burner Twitter accounts. But every destination has its flaws. Philly gives James the best combination of championship potential and possible upside for his brand as an all-time NBA legend. That’s why, this time around, LeBron should take his talents to South Broad: