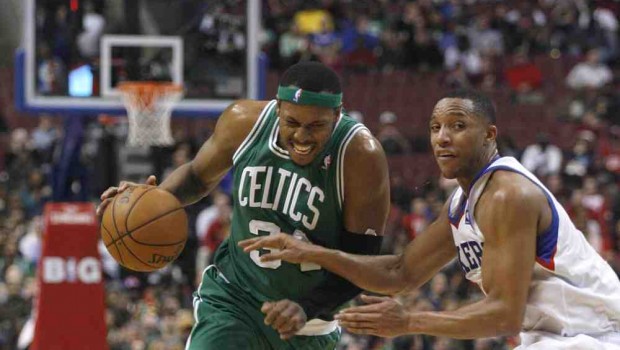 WITH IVERSON AND PIERCE, ‘SIXERS WOULD HAVE WON TWO TITLES!’

The Sixers have screwed up their draft picks a lot in their recent history.

Do the names Shawn Bradley, Evan Turner and Larry Hughes ring any bells?

And last spring former coach Larry Brown admitted the Sixers had rated Paul Pierce (above) as the No. 2 player in the draft in 1998. However, they selected Larry Hughes instead because they promised him they would take him if he was available at the eighth spot. Next, the Milwaukee Bucks selected Dirk Nowtizki (and traded him and Pat Garrity to the Dallas Mavericks for Robert Traylor, the sixth pick), and then the Boston Celtics took Pierce.

As Pierce plays in what could be his final NBA season, it didn’t take him long to hypothesize what could have happened had the Sixers chosen him instead.

“Well, Philadelphia would probably be sitting on two championships,” he told CSNPhilly.com last week prior to the Clippers game against the Sixers. “Me and Allen Iverson would be in the history books. End of story.”