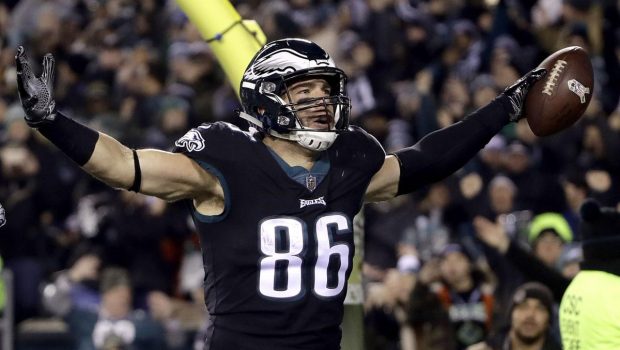 Eagles tight end Zach Ertz caught 116 passes in 2018 for his best season ever in Midnight Green.

And he thinks the return of wide receiver DeSean Jackson will mean “more space in the middle of the field” as defenses adjust to make sure Jackson doesn’t beat them over the top.

If that translates to another year of big receiving numbers, it may allow Ertz to reach one of his goals.

Rob Gronkowski was considered the league’s best tight end for most of his career, but Gronkowski has retired and Ertz would like to take his place.

“I’ve said it since my rookie year, which I can’t believe was seven years ago,” Ertz said, via Philly.com. “I said I wanted to be one of the best to ever play the tight end position, not only in this organization, but anywhere. … People are saying there are one or two guys that are better than me. My goal is to be the best. So I have a huge chip on my shoulder going into this year.”

Catching a lot of balls might not be enough for Ertz to get that recognition as Travis Kelce and George Kittle edged him out in All-Pro voting last year, but it would likely work just fine for the Eagles.