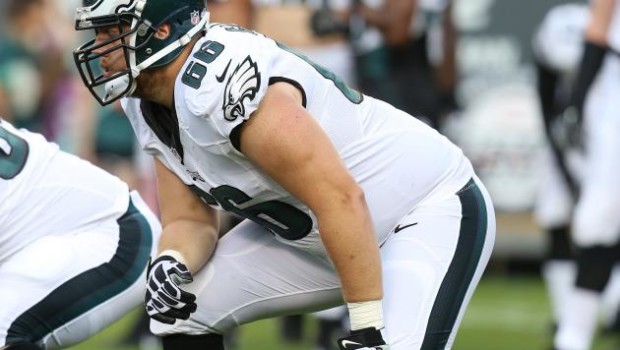 NFL free agency starts Wednesday, and the Eagles, though with only about $17 million under the salary cap, could be players.

Especially on the offensive line, since quarterback Sam Bradford spent most of the 14 games he played last season running for his life because of the line’s inability to protect him.

The Birds have several bench players who are masquerading as starters:

Andrew Gardner (above) was a starter at right guard until he suffered a season-ending foot injury, and he should return healthy and add depth. He has played some right tackle – Gardner started two games there in 2014 for the Eagles – and he might be an already-on-the-roster option to back up on the edges. So is Kelly, who has nine starts at right tackle in his five Eagles seasons.

Jason Kelce didn’t have his best season in 2015, as he has talked about it frequently. Maybe it was the changing of the guards next to him, or the way the offense was structured, or Kelce himself. Perhaps it was a combination of all of the above. Kelce has been a regular at the NovaCare Complex in the offseason, a good sign for a player who should be a Pro Bowl regular.

Lane Johnson’s 2015 season was, just like the entire offense, marred by inconsistency. He’s got all the tools and the work ethic and the intelligence, so it’s just a matter of time before he finds his way to Pro Bowl-level play on an annual basis.

Allen Barbre started the entire season at left guard and was durable for all 16 games and he had his fine moments. But were there enough of them for the Eagles to feel like an upgrade isn’t in order? We’ll see.

Gardner, Matt Tobin and Dennis Kelly are veteran reserves, and Barrett Jones and Tanner Hawkinson have been in the league for a few years and are players the Eagles want to take a longer look in Training Camp. Josh Andrews is a young prospect who has a chance to earn some playing time and both Malcolm Bunche and Brett Boyko, who spent 2015 on the practice squad, look to make more of an impact in the season ahead.