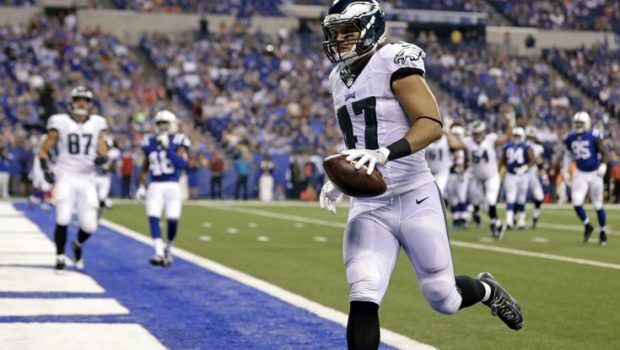 WITH ERTZ OUT MONDAY, EAGLES WILL RELY ON TE TREY BURTON

It’s not official yet, but it looks as if Eagles tight end Zach Ertz will miss Monday’s night game in Chicago with a displaced rib near his left shoulder that will probably cost him several games.

The Eagles have veteran Brent Celek at the position, but Doug Pederson’s offense calls for a lot of two tight-end, and even three tight-end sets. He may have to go without the three.

He’ll stick with the two tight set and that means a lot of Trey Burton.

Die-hard Eagles’ fans know Burton, as the undrafted player from Florida who made the team in 2014 and developed into one of the their best special teams players over the past two years.

Now, he’ll get the chance on offense, after playing just 69 snaps there over 31 games the past two seasons and catching three passes for 56 yards.

What does Burton have to do?

Use his speed and athleticism. Burton is so good on special teams, because he’s a good athlete. At Florida he played quarterback, running back, fullback, wide receiver and tight end. The guess here is Pederson lines him up in different spots to take advantage of that versatility and also to draw mismatches against the Bears’ defense.

Play as if it was the summer: In all three preseasons he’s played and in all three of his training camps, Burton has showed excellent hands, the knack to get open, especially against zone defenses, and playmaking ability. It’s how he made the team as a rookie in ’14 and stayed on the team in ’15. Now, he’ll get the chance to do it for real in a regular-season game on national television.