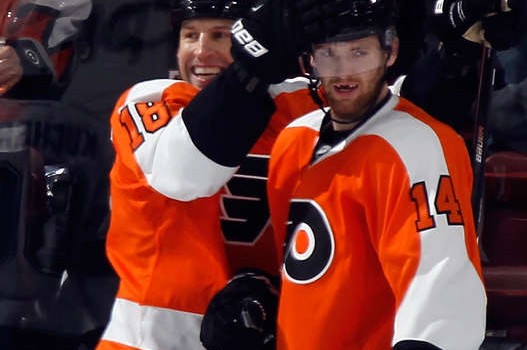 WITH COUTURIER OUT 3 MORE WEEKS, WILL FLYERS MAKE A TRADE?

The Flyers have another chance tonight at home to win a game and advance in their chase for a spot in the NHL playoffs.

But Sean Couturier’s injury made general manager Ron Hextall take a harder look at a trade with the deadline approaching and a tight Eastern Conference wild-card race unfolding.

Adding another asset might become futile, though, if the Flyers don’t start winning without their young center.

The Flyers will try to avoid a fourth straight defeat tonight when they hosts a Buffalo Sabres team also suffering through a three-game skid and injury concerns of its own.

Couturier (above right) had an assist in last Thursday’s win over Nashville to give him 10 along with six goals in his last 16 games, but he suffered an ankle injury in that contest that is expected to keep him out at least three more weeks.

The Flyers (23-20-9) are 0-2-1 since the 23-year-old went down following Tuesday’s 4-1 loss to Anaheim and are 2-8-2 without Couturier on the season. They’ll have to jump five teams to get into playoff position in the East, but it’s still a close race with plenty of time remaining.

Hextall could choose to replace Couturier before the Feb. 29 trade deadline, which is shortly before Couturier is expected to return. For now, he’s hoping the current players can show they can overcome Couturier’s absence.

“He’s a big part of our team, we all knew that,” Hextall said. “Would we like him back tomorrow? Yeah. It would be terrific. But it’s not going to happen, so we’re going to go with what we’ve got. And we need to find ways to win games.”

It hasn’t helped that the Flyers have been on the ice plenty since returning from the All-Star break. This will be their sixth game in 10 days, and they won’t have more than two days off until March 8-10.

“This time of year, it’s a busy schedule, so I don’t know how many people have the luxury of being 100 percent healthy or feeling physically 100 percent energized,” said rookie defenseman Shayne Gostisbehere, who has two goals and 10 assists during a nine-game point streak. “Everybody’s got to get themselves ready and prepared and go out and do the job.”

The Sabres (21-27-6) also are having health issues. Forward Zemgus Girgensons suffered an upper-body injury in Saturday’s overtime defeat at Boston and sat out Tuesday’s 7-4 loss to Florida, then was placed on injured reserve Wednesday.

Winger Johan Larsson also sat out against the Panthers after suffering an undisclosed injury in the morning skate. He didn’t practice Wednesday and his status for this contest is unclear as Buffalo looks to win a third straight meeting with the Flyers this season.

Girgensons scored in overtime to give the Sabres a 4-3 win Oct. 27 before Ryan O’Reilly had a goal and two assists in a 3-1 win Oct. 30. O’Reilly, though, has gone 13 straight without a goal despite having 10 assists in that span.

He assisted on both of Sam Reinhart’s power-play goals against Florida.

“I thought Ryan actually was a guy who stood out (Tuesday) in how he played,” coach Dan Bylsma said. “He’s squeezing a little bit when it comes to shooting the puck and scoring goals for us right now, but I think that’s a frustration we all share.”

It’s unclear if Robin Lehner or Chad Johnson will get the start in net after Johnson relieved Lehner on Tuesday.

Steve Mason is 2-2-1 with a 2.59 goals-against average starting each game for the Flyers since former Sabres goalie Michal Neuvirth suffered a lower-body injury. Coach Dave Hakstol said he hasn’t ruled out giving Anthony Stolarz his first NHL start in this contest.