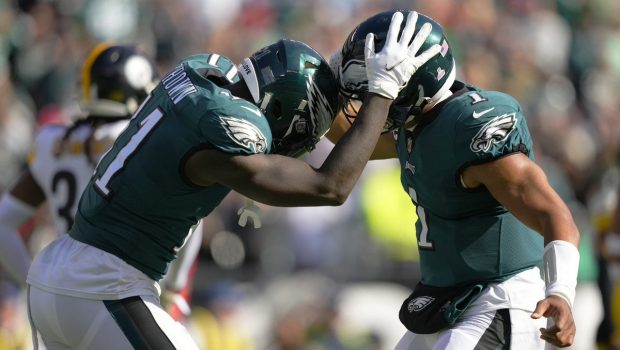 We have just passed the midway point of the 2022 NFL Season. As week 12 closes, we have only six more weeks of NFL football.

There have been many surprises thus far—some to the good and some to the bad.

We break down the Top 5 surprises we have seen thus far in the season, as well as what teams are locked to make the NFL Playoffs.

The Eagles finished the 2021 season with a 9-8 record while locking up a playoff spot. Their playoff journey ended quickly as they lost to the Buccaneers in the Wild-Card round 31-15.

During the NFL draft, the Eagles made a big splash as they traded for AJ Brown, and now Brown, Jalen Hurts, and the rest of the offense are carving up opposing defenses.

The Downfall of Brady and Rodgers

We knew at some point, father time would finally catch up to Tom Brady and Aaron Rodgers.

Through 12 games, Rodgers has already thrown nine interceptions, the most he’s thrown in the season since 2010. Not only are his interceptions up, but his current QB rating (92.9) is the second lowest since becoming the starting QB.

It’s not so much the downfall of Brady but the disappointment thus far for the entire Tampa Bay Buccaneers team. Tampa Bay is currently 5-6 in a battle for the NFC South Title. The Bucs rank 17th in total Offensive DVOA and 27th in scoring offense (18.2).

After posting a 4-13 record last season, the New York Jets have surpassed expectations in 2022. Sportsbooks had set the Jets’ preseason win total to 5.5 games. They just recorded their seventh win in week 12 with a 31-10 win over the Chicago Bears.

The Denver Broncos traded two 1st-round picks, two 2nd-round picks, and a 5th-round pick, Noah Fant and Drew Lock, to get Russell Wilson, then give him a $245 million contract extension. After all that, the Broncos sit at 3-9 and at the bottom of the AFC season.

The Broncos’ offense currently ranks 30th in Success Rate (39.2%) and EPA/Play (-.110). Wilson himself ranks 30th out of 33 qualified QBs in success rate. Only Carson Wentz, Davis Mills, and Baker Mayfield have been worse, per rbsdm.com.

Last season the Miami Dolphins ranked 24th in total offense, 23rd in passing offense and 29th in rushing offense. In 2022 the Dolphins are a completely different team, thanks to the additions of Tyreek Hill and new Head Coach Mike McDaniels.

In 2022, the Dolphins currently rank 2nd in total offense, 1st in passing, and 14th in rushing. Miami owns an 8-3 record with a seat at the top of the AFC East.

Research the most trusted and reliable offshore sportsbooks before making your playoff bets.

Currently, the Commanders are sitting in the 7th spot, just cutting the playoffs if they started today.

With five games left, they have 3 division games, two with the Giants and one with the Cowboys. Not to mention another game with the San Francisco 49ers. The Playoffs are a definite possibility for Washington, but for a realistic shot, they would need to go 3-0 in those divisional games to cement themselves in the NFC Playoffs.

We all know how electric the Dolphins’ offense can be. The key to Miami’s success is its defense. Adding Bradley Chubb to the defensive lines is a massive upgrade to a defense that ranked 20th in sack percentage.

The Raiders may have found their footing. Las Vegas has won back-to-back games in walk-off fashion.

The Raiders will have to rattle off a few more wins if they have any shot at the playoffs, but with a more manageable schedule on the horizon, there is a definite possibility for a late postseason run.

Las Vegas ranks 7th in offensive EPA/play and have scored points on 45.5% of their drives, which ranks 13th in the NFL.

After opening the season 0-2, the Bengals have just won their third straight games and are tied sitting atop the AFC North.

They are getting hot at the right time, as they did last year. The Bengals’ offense is scoring points on 41.7% of their drives which is the 5th best in the NFL; only Buffalo, Philadelphia, Miami, and Kansas City have a higher rate.

The Giants have a realistic shot at making the playoffs, and getting them at even money is a great value.

New York is sitting sixth in the NFC playoff standings. Moving forward, it’s looking like a three-team race between them, Washington and Seattle. The Giants are set to face Washing twice over the next three weeks. Splitting those two games would put them in a great position, and winning both would likely cement them into the postseason.

It is always essential to put in the research before placing future bets. Ensure you obtain as much information as possible, and always shop for the best line or odds before placing your bets.

Here are some NFL betting sites