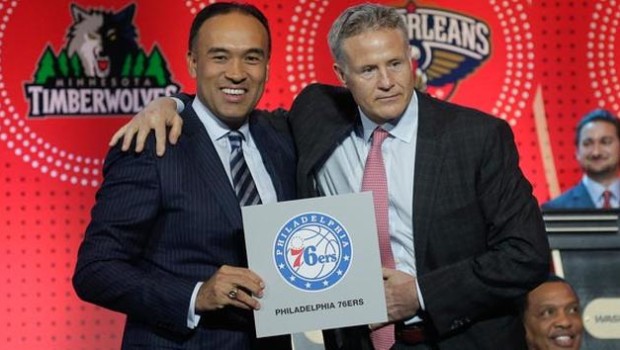 WITH 3 1ST-ROUND PICKS, SIXERS WILL DOMINATE THE NBA DRAFT!

This may come as a shock to all the losers in the lame-ass Philly media who are still judging the Sixers as the red-headed ugly stepchild of Philly sports:

They will be the most important franchise in the coming draft!

Yes, it’s true that the 76ers didn’t get three of the top 11 picks in the June 23 draft, as they could have, but they got the top pick. They will not trade it.

Whether they take LSU freshman Ben Simmons or Duke freshman Brandon Ingram is up in the air, but they will, barring some incredible turn, take one of those two.

Either will add to the team’s incoming talent pool: European star and 2014 Draft pick Dario Saric, whom the 76ers expect/hope will come over to the NBA next year, and Joel Embiid, the 2014 first-rounder who has been rehabbing a foot injury for two years and who has not played a minute in the NBA.

But Philly, with three first-round picks, Boston (ditto), the Denver Nuggets (ditto ditto) and Phoenix will run the show in the June 23 draft.

The 76ers are still the worst team in the league, but they are now ready to accelerate “The Process” and try to start winning now under new general manager Bryan Colangelo. (In fairness to former GM Sam Hinkie, he also expected to turn the corner this summer.) The uncertainty of last year, when Jahlil Okafor was rumored not to want to go to Philly, is not there this year. Who knows why? But both Simmons and Ingram, according to sources, are fine with going No. 1 to Philly.

Simmons and Ingram, the Sixers believe, are “blue-chip people,” one source said, who are both well-known already inside the organization — Brett Brown coached many years in Australia and knows Simmons’ family, and the Colangelo family’s ties to Duke through Olympic coach Mike Krzyzewski provide them with all the inside dope they’ll ever need on Ingram.

The Sixers will be at Ingram’s workout in New York today, along with other clients of his representative, Excel — Kentucky guard Jamal Murray, teenage big man Thon Maker, Connecticut wing Daniel Hamilton and California point guard Tyrone Wallace. And, more to the point — either player could help immediately, depending on how Philly addresses the redundancy on its current roster.

Simmons is a four, the Sixers believe, but they see him at that position the way the San Antonio Spurs utilize Kawhi Leonard at the three — a forward who initiates the offense, and through whom the team can run its offense. They also remind you that when Leonard was first drafted, very few believed he’d ever be a good perimeter shooter. The same kind of improvement is possible for Simmons, who shot just 33 percent on 3-pointers in his lone season at LSU.

Yet the Sixers already have Okafor at the four, and possibly Saric next year. Taking Simmons wouldn’t make sense unless they were determined to trade Okafor, whose up and down rookie season hasn’t adversely affected his value around the league. And trading Okafor would be the easiest and best way for Philly to get another high first-round pick, which the Sixers covet.

There is strong support within the organization for Nerlens Noel, who provides defense and rebounding that none of Philly’s other bigs provide. Keeping him would give Philly the flexibility to keep another offense-dominant big. But the Sixers tried playing Okafor and Noel together last year, with terrible results. And can Noel play in the modern age of basketball, when centers are increasingly shorter and more versatile offensively?

But until Embiid shows he can play regularly, Philly has to keep a center like Noel on the roster. They can’t take the risk of Embiid breaking down again.