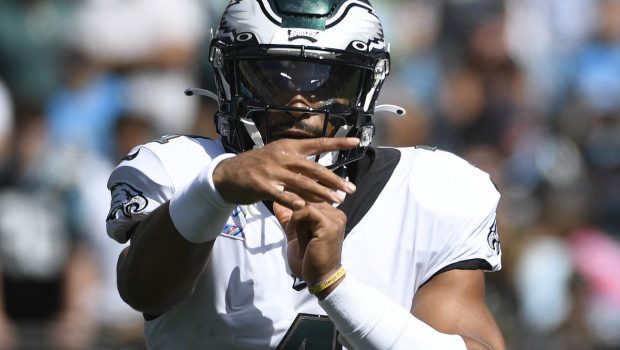 WINNING UGLY: HOW EAGLES QB JALEN HURTS GUTTED IT OUT!

Yesterday was an ugly win for the Eagles, which is also the best you can say about quarterback Jalen Hurts.

He played the first half as if he were in a trance, passing for just 74 yards on 24 attempts while seeing a shotgun snap sail over his head and fumble out of the end zone for a safety.

He also had a badly overthrown interception in the third quarter, which came after his team lost another fumble the possession prior.

And yet, Hurts rallied to close the third, hitting Quez Watkins for 53 yards before sneaking in himself for a touchdown.

Hurts then ran in from six yards for another score to put the Eagles ahead in the fourth, and then completed a two-point conversion pass.

Not a pretty performance from Hurts, who struggled in particular as a passer, but his impact from in close on the ground ensured the comeback victory.

Hurts completed 22 of 37 passes for 198 yards and an interception.

He also rushed nine times for 30 yards and two touchdowns.