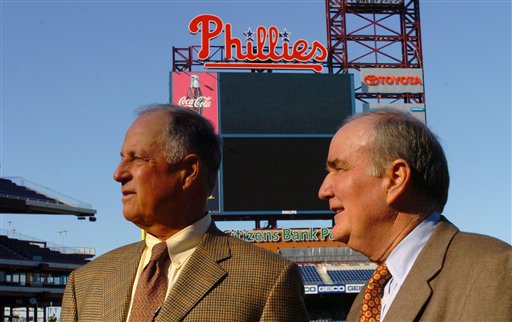 WINNING STREAK ASIDE, PHILLIES NEED TO TRADE WHILE IRON IS HOT

The Phillies are hot, no doubt about it.

Last night’s 4-3 win at Colorado was their sixth straight, and it pulled them out of last place in the NL East.

But let’s not lose sight of what the 2015 season’s purpose is:

Cole Hamels, Jonathan Papelbon and Ryan Howard have been available for a trade for a while, but general manager Ruben Amaro Jr. hasn’t found the right deal for various reasons.

”We’re not trying to make the perfect deal. In any deal we make, to put it bluntly, both sides have to be winners,” team president Pat Gillick told the Associated Press last week.

”People think you make a deal to take advantage of someone else. No, that isn’t the case because you want to go back and have repeat business with that person. When you’re making a deal, you want to make a fair deal. He’s not looking to make a deal that’s going to bring the house down.”

Hamels, a three-time All-Star and the 2008 World Series MVP, should bring the Phillies the best return. The 31-year-old lefty has three years and $73.5 million left on his contract, $87.5 million if his 2019 option kicks in. He’s a proven big-game pitcher who dominated in the postseason.

Boston, St. Louis and Toronto are often mentioned in trade rumors for Hamels. The Red Sox have the worst staff ERA in the AL. The Cardinals lost Adam Wainwright for the season. The Blue Jays never replaced Marcus Stroman. Other teams including the Los Angeles Dodgers and Chicago Cubs and White Sox could be interested.

The Phillies certainly want top prospects in return for Hamels, but perhaps it won’t take as many high-level players as reports have indicated.

”We haven’t got an offer that’s commensurate with his ability,” Gillick said of Hamels. ”In some places it’s been portrayed that we’re looking for an overreach and the reason Ruben hasn’t made a trade is because we’re overreaching. I don’t think that’s the case at all. We’re very open to any proposal and, at this point, we don’t think we’ve got a proposal that we feel is (right).

”Right now, Hamels and Papelbon are performing at the same skill level they have over the past four, five years. It’s a little different situation with other players who aren’t performing the way they’d like to be performing.”

Papelbon has been excellent, converting all seven of his save chances with a 1.26 ERA after 39 saves in 43 tries in 2014.

On Wednesday night, he surpassed Jose Mesa to become the franchise’s all-time saves leader with 113. He also is Boston’s franchise leader with 219.

Papelbon already has made it clear he wants to play for a contender. The 34-year-old righty could help Miami, Toronto, Cleveland, Pittsburgh, the Cubs and Dodgers, among others. He’s making $13 million this season, and his option for $13 million next year becomes guaranteed with 48 games finished.

Howard would’ve been traded long ago if the Phillies found any takers. His contract – $25 million this season with $35 million more owed for 2016 and a buyout – and decline in production make the 2006 NL MVP difficult to move. Howard is batting .211 with seven homers and 15 RBIs. Despite his low average, he’s on pace for 28 homers and could help an AL team that needs power and wants to use him as a DH.

Chase Utley, another past-his-prime former star, is even tougher to trade. Utley is hitting just .123 and has no-trade rights. The six-time All-Star second baseman has three vesting years remaining on his contract. If he has 500 plate appearances this season, he’s guaranteed $15 million in 2016. The same scenario exists for the 2017 and 2018 seasons.

”We’ve been in dialogue about a lot of things,” Amaro said about trade conversations. ”That really hasn’t stopped since the offseason.”

The Phillies won five straight NL East titles, two pennants and one World Series from 2007-11, but have steadily declined each year. Amaro waited too long to start rebuilding. He traded outfielders Shane Victorino and Hunter Pence on July 31, 2012, but kept Hamels and Cliff Lee because the Phillies were hoping for one more run. Instead, they went 73-89 in 2013 and ’14.

Now they’re stuck with Lee and his hefty contract because he’s injured. It’s risky to keep Hamels past the trade deadline.

”You’re always taking more chances with pitchers because they’re more injury-prone than position players,” Gillick said. ”If Ruben had an offer that he thought was a fair offer that we felt was fair for the Phillies and fair for the other team, he would do it, but that proposal hasn’t come forward.”