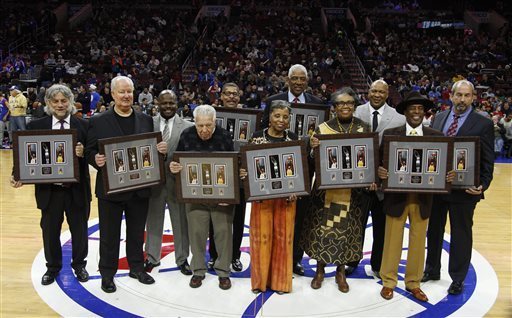 Among the Wilt celebrators last night were Harvey Pollack (front row, third from left), Wilt’s sisters Barbara Lewis and Selina Gross, Wilt’s pal Sonny Hill (in the hat); and in the back row, bespectacled Wally Jones, who played with Wilt on the 1967 NBA title team and alltime Sixers great Julius Erving.

It was like a class reunion Friday night at the Wells Fargo Center as the Sixers honored Philly legend Wilt Chamberlain on the occasion of his USPS stamp being released.

Chamberlain, who played in Philly for the old Warriors and then the Sixers, is arguably the greatest player in NBA history.

There is no argument here. The Wilt Chamberlain Limited Edition Forever stamps, featuring the “Big Dipper” in poses with the Philadelphia Warriors and Los Angeles Lakers, became available on Friday morning. Chamberlain is the first NBA player to appear on a U.S. postage stamp.

His stamps are just over two inches tall, or a third to twice the size of a typical commemorative stamp, according to the United States Postal Service. The word “Wilt” is on the corner of each stamp.

A Philly native who went to Overbrook High, Chamberlain set many individual records while playing for the Warriors, 76ers and Lakers but none more distinguished than the single-game scoring record he set on March 2, 1962 when he scored 100 points for the Warriors against the Knicks. The 13-time All-Star ended his career with 31,419 points and 23,924 rebounds.

At halftime former 76ers great Julius Erving was joined by Chamberlain’s sisters, Barbara Lewis and Selina Gross, and others holding plaques featuring the stamps. Among those holding a plaque was Harvey Pollack, who was a statistician during the 100-point game and the man responsible for making the famous “100” sign that Chamberlain held after the game.