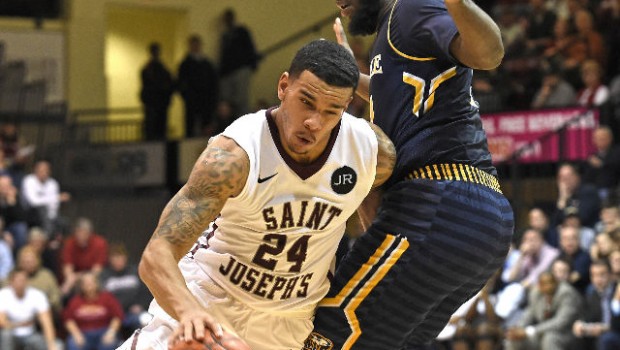 It hasn’t been a lot of fun on Hawk Hill this basketball season as St. Joseph’s has spent all year trying to get to .500.

But there is nothing like a game against Big 5 rival LaSalle to get the Hawks’ juices flowing.

Chris Wilson (photo above) scored 22 points and hit a three-pointer in the final minute to help give St. Joe’s a 55-50 win over La Salle on senior night at Hagan Arena.

“It was great to have a game like this, but most importantly we got the win,” Wilson said. “That’s the biggest thing for us.”

With offense hard to come by on both sides (St. Joe’s and La Salle each shot less than 32.0 percent from the field), potential Atlantic 10 Player of the Year Bembry put the Hawks on his back yet again.

Bembre may have shot just 4 for 19, be he did whatever needed to be done on both ends of the floor to spark a 14-2 run and regain the lead for St. Joe’s.

“We needed this win,” said Bembry. “I’m a leader on this team and I just take it upon myself to make things happen.”

His coach thought he should have made at least a little more happen.

“How in the hell don’t you get one more assist?” Phil Martelli said, jokingly. “It would have been the ugliest triple-double in history.”

It was another tough loss for the Explorers, who have now dropped four straight at the worst possible time.

“We just seem to be coming up a little bit short. We aren’t quite good enough lately,” La Salle coach John Giannini said.

That hasn’t been the case recently for Wilson, who has now scored in double figures in four straight games. After dealing with injuries and subsequent spotty play all season, he appears to have turned a corner.

“This has been the most frustrating year playing basketball of my entire life,” Wilson said. “I’ve dealt with several injuries. There were times I didn’t feel like coming to practice because I wasn’t able to do the things I’m capable of on the court. But I’m a leader here, so I know guys look to me. I just fought through it.”