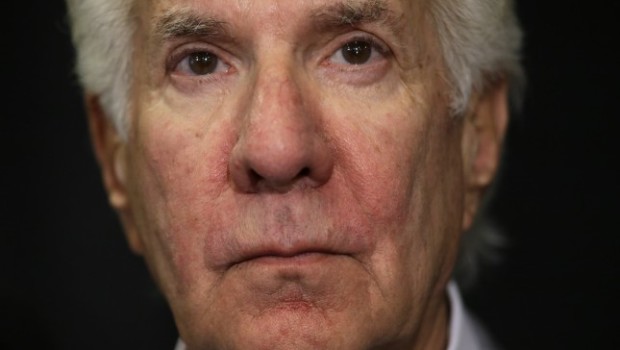 WILL SOMEONE, ANYONE, GET FLYERS OWNER ED SNIDER TO SHUT UP?

Will someone — anyone! — please tell Flyers owner Ed Snider to shut the hell up and let his general manager do his job?

I don’t care who it is, really.

His butt boy friends in what passes for the mainstream media.

Every time Snider opens his mouth and expresses an opinion on his beloved team, which, by the way, hasn’t won a Stanley Cup since Madonna was 16, it makes Ron Hextall’s job that much more difficult.

And that job is finding a new coach and preparing for next month’s draft.

By the way, Hextall is so subservient that he still calls him “Mr. Snider!”

“All I did was clarify what Ron Hextall had been saying – which is simply, we’re going to be extremely patient with all of the young players we have coming. We’re not going to rush them along; we’re going to make sure they’re NHL-ready before he brings them up to the big club. . . .

“But the bottom line is, that patience was misinterpreted to mean that he was going to be patient with the team in and of itself. Which he’s not. He’s going to do everything in his power to produce a winner as soon as possible, which means it could be trades, it could be coaching, it could be all kinds of things.”

With the right moves, can the Flyers contend for a Stanley Cup next season?

“I don’t like to predict those kinds of things,” Snider said. “You never know. As I’ve said in the past, when we got in the playoffs on a shootout [in 2010], who would ever think we would go to the Stanley Cup Finals? You can’t predict that kind of thing. Eighth-place teams win the Cup, like L.A. did [in 2012]. Once you’re in the playoffs, if you get great goaltending and get breaks here and there, anybody can win.”

The 2014-15 Flyers missed the playoffs for the second time in three seasons and finished 33-31-18. They never really developed an identity – like the physical and fast Anaheim Ducks or the speedy New York Rangers.

Snider, whose early teams were known as the Broad Street Bullies, was asked what he wanted the Flyers’ identity to be in coming seasons.

“That’s a tough question,” he said. “The rules in hockey have changed drastically. Obviously, most teams that are successful have changed with the times, and we have to also. We have to forge a new identity around our stars. I think we have three great forwards, we have outstanding goaltending, we’ve got promising young defensemen, so I think we’ll forge a new identity in the future.”

The Flyers’ defense has been a weak link ever since Chris Pronger went down with a career-ending injury in 2011. But down the road, the team’s identity may revolve around defense if its Big Four – blue-line prospects Shayne Gostisbehere, Sam Morin, Travis Sanheim, and Robert Hagg – are as good as advertised.

“You put the best players you can find on the ice and each one has a different type of identity, and you try to push them all together to have the kind of team that’s going to win,” Snider said. “The best identity is winning.

“…But I really think we have a lot of good pieces in place and have a lot of good young talent on the horizon, so I’m really looking to the future. And I really am a big fan of Ron Hextall and what he’s doing. I think he’s going to continue to improve our team and make the right moves for the long haul.”

Hextall, who is searching for the team’s third coach in three seasons, has made trades that have given the Flyers seven picks in the first four rounds of next month’s draft.