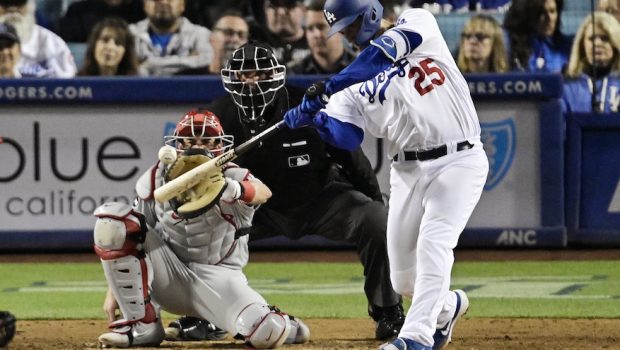 WILL SMITH (NOT THE ACTOR) SINKS PHILLIES FOR DODGERS!

Will Smith — called up when catcher Austin Barnes got hurt — hit a towering, tiebreaking home run in the bottom of the 9th inning, giving the Los Angeles Dodgers a 4-3 comeback victory over the Phillies.

He caught ace Clayton Kershaw for seven innings and then smashed his first career homer into the left field pavilion off Hèctor Neris (1-2).

Julio Urias (3-2) got the victory with two innings of relief after giving up a two-run homer to Bryce Harper in the eighth that tied it at 3-all in a matchup of division leaders and the two best teams in the National League.

The Dodgers have won 14 of 17; the Phillies lost their third in a row.

“This is a really disappointing loss,” Phillies manager Gabe Kapler said. “Neris has been a stud and Smith put a good swing on a split at the bottom of the zone and that happens sometimes.”

David Freese homered into the left-field pavilion on the first pitch from Cole Irvin leading off the fifth, putting the Dodgers in front 2-1.

The Phils tied the game at 1 in the fourth on J.T. Realmuto’s RBI single.

Harper, who was 0 for 4 in Friday’s opener, singled, took second on a wild pitch by Clayton Kershaw and moved to third on an error by Muncy. Rhys Hoskins was safe at first on the error to set up Realmuto.

The Dodgers added a run in the bottom of the inning on Muncy’s sacrifice fly that scored pinch-hitter Matt Beaty, who reached on an infield single to first base.

Kershaw allowed one run and six hits, struck out six and walked none.

Josè Àlvarez started for the Phillies in place of Zach Eflin, who went on the IL Friday with mid-back tightness. Àlvarez gave up one hit and two walks in two innings.