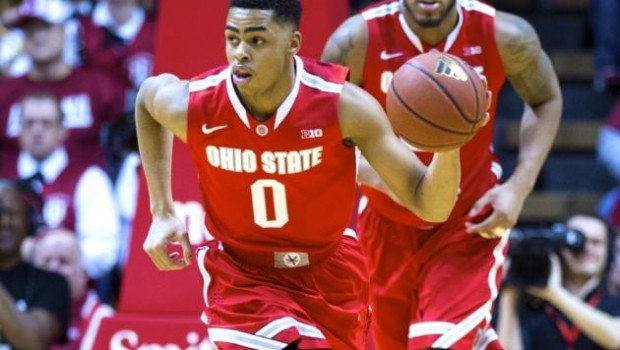 If Sixers win the lottery and get the top pick, GM Sam Hinkie could trade down to get more picks and still draft point guard D’Angelo Russell (above).

The other 31 NBA teams are in the same boat as Sixers Nation:

Waiting to see if GM Sam Hinkie will stand pat on draft night June 25 or make as many waves as he has the last two seasons?

Well, if Philly doesn’t budge on draft night, it will add six more freshmen to its already young core—eight if a few lottery ping-pong balls fall in its favor. (The odds are low, but the Sixers could potentially add the Lakers’ top-five protected pick and a top-10 protected selection from the Miami Heat.)

No team needs that much young blood. Not even one that suited up 25 different players this season.

The Sixers could be the one team that moves (slightly) at the top of the board. With Nerlens Noel and Joel Embiid set to man the frontcourt next season, Philly has no obvious need for either Karl-Anthony Towns or Jahlil Okafor. The one player that makes a ton of sense there is D’Angelo Russell, a smooth scoring combo guard with the long-range stroke to give this offense the spacing it needs.

If Philly lands the top pick, it might be able to add to its oversized asset collection by trading down a few spots to nab Russell. If that isn’t possible, the Sixers are still the most likely candidate to deal with no reason to keep all of their second-round picks. If nothing else, they could package a few together to move up for a sleeper they really like.