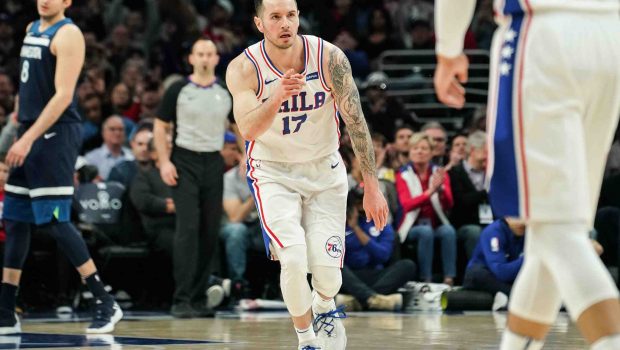 The Sixers’ magical ride through the NBA continued last night.

Call it marching through Atlanta:

A franchise record with their 15th consecutive victory that moved them close to clinching the No. 3 seed in the Eastern Conference, holding off the Hawks 121-113.

”We all are greedy,” said Brett Brown, the coach who was there for the bad times and now is getting to savor what has become one of the NBA’s most compelling stories. ”We want more. I want more. I tell my team that all the time. This is when the fun begins.”

The 76ers overcame a tough outing for rookie star Ben Simmons, who missed the morning shootaround after coming down with the stomach flu. He was feeling better by game time but still seemed a bit out of sorts, finishing with 14 points, 10 rebounds and six assists before fouling out with 7 seconds remaining.

Simmons picked up a technical in the third quarter for arguing all the way down the court about a call that didn’t go his way.

”We had some lapses tonight where we didn’t play that well,” he said. ”But we held it together.”

His teammates helped pick up the slack. Redick hit 6 of 9 from beyond the 3-point arc , while Ilyasova and Belinelli – who started the season in Atlanta but were dumped by the rebuilding Hawks – combined for nine 3-pointers.

Now, the 76ers can lock up the East’s third seed with a home victory over Milwaukee in the regular-season finale Wednesday night.

”We have a real opportunity that we don’t want to let slip,” Brown said. ”We can control our own destiny. We’re not a prisoner to other people’s events. That, in and of itself, is rare and not to be taken for granted.”

The Hawks were long ago eliminated from playoff contention, closing out their worst season since 2005 with a record of 24-58.