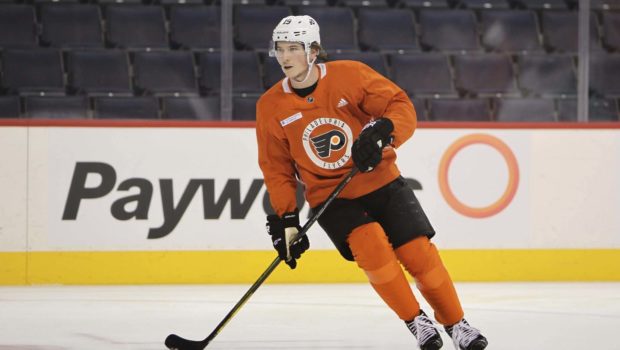 So, will Flyers fans get a glimpse of fragile rook Nolan Patrick tonight in Winnipeg?

But for those who forgot what he looked like because he hasn’t played in 23 days, check out the photo above of Patrick practicing yesterday for tonight’s game against the Jets.

Patrick, selected second overall in this summer’s NHL draft, has been sidelined since Oct. 24 with a suspected concussion, sustained when he took a hit from Anaheim Ducks forward Chris Wagner. By all accounts, the thunderous body check was within the rules of the game but it caused the former Brandon Wheat Kings star to strike his head against the glass.

The Flyers’ second-line centre watched the third period of that game from the press box and practiced the next day. He also took the morning skate on Oct. 26 prior to a game in Ottawa but was scratched against the Senators that night and hasn’t played since.

He resumed skating less than a week ago and is listed as day-to-day.

The Flyers (8-8-2) practiced yesterday but didn’t do any line rushes, so that provided no clues to Patrick’s status for a matchup with the Jets tonight. Patrick was moved swiftly on two-on-ones and tried some sleight of hand when the team spent the final 10 minutes working on their shootout attempts.

After the skate, neither the player nor his coach gave any indication one way or the other.

“It sucks a lot. I don’t think anyone ever wants to be hurt. It’s part of the game, so I’m just staying positive during the process,” Patrick said. The 19-year-old scored the first goal and only goal of his young NHL career Oct. 10 against the Nashville Predators, beating one of the league’s elite netminders, Pekka Rinne, during a scramble in front. He also added a pair or assists in nine games before getting injured.

“Yeah, (there has been progress) for the most part. It’s been a little while now but I’m feeling pretty good.”

The son of former NHLer Steve Patrick said he’s not certain when he’ll be inserted into the lineup, but had been relishing the opportunity to play in Winnipeg.

“I have no idea. That decision’s not really up to me, so I guess we’ll see what happens,” he said. “Anywhere would be nice. But, obviously, if I was able to play here it’d be pretty cool to play my first game in my hometown.

“It’s up to (the coaches and medical staff). They have a lot more information on it than I do.”

Asked what needed to occur between the end of practice and puck-drop tonight for Patrick to get clearance to play, Flyers coach Hakstol wouldn’t bite — although it did sound like the verdict is now in his hands.

“I’ll make the decisions on game day, like I always do. All year, I haven’t commented on our lineup and I won’t do it until (Thursday) as well,” Hakstol said. “That’s just the way we’ve handled our business going into game days.

Patrick cracked the Flyers’ roster following training camp, despite not scoring during the pre-season. The 6-2 forward admitted there was a big learning curve, but he fully expected that coming out of junior hockey.

“You see how the top guys carry themselves and see how hard they work on and off the ice. There’s a lot of guys you can learn from every day, and I try to take little things from them,” Patrick said. “I was expecting (the game) to be faster, so that’s probably the main thing.”

Projected as the likely No. 1 pick for nearly a year, Patrick fell to Philly at No. 2 when the New Jersey Devils used the top selection on Nico Hischier. The dynamic Swiss-born forward has three goals and 14 helpers in 17 games for the Devils and is second in team scoring behind Taylor Hall (6G, 13A).

At the draft, Flyers GM Ron Hextall said he was thrilled to get the talented, two-way centre, even though Patrick played through a hernia last year in the WHL and needed surgery in the summer.

Patrick said enduring that hardship has helped him deal with the latest setback.

“It’s not that frustrating. I’ve been through the injury process before, so I know how to handle it. I just try to stay positive through the whole thing,” he said.

The Flyers could use an infusion of offence. The squad is coming off back-to-back shutout defeats to the Minnesota Wild and the team hasn’t scored in seven periods.

“It’s pretty impressive for a young guy to come in and play the way he did. I had a chance to play with him before he got hurt, maybe three or four games, and you see the one pass he made to me (Oct. 17 against the Florida Panthers), which is highlight reel between his legs, he’s got elite skill,” said Weise, who has a pair of goals and one assist in 15 games.

“He’s one of those guys where the game just slows down when it gets on his stick. So, this is obviously a tough start for him but he’s got a long, great career ahead of him.”