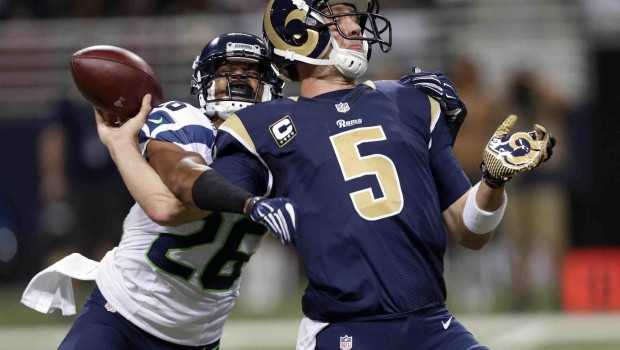 WILL RAMS EVEN NOTICE THAT EX-EAGLE QB FOLES IS MISSING OTA’S?

Let me see if I get this right.

Former Eagles quarterback Nick Foles, who was traded to the Rams 15 months ago for Sam Bradford and promptly played like a high schooler, is now L. A.’s third-stringer.

And he is not attending the team’s OTA’s.

Foles clearly doesn’t want to be the third-stringer for the Rams, but if he wants to get a job as a No. 2 quarterback somewhere else, his decision to skip OTAs isn’t helping.

It’s a tough 180 after being their clear-cut starter this time last year. Months after the Rams acquired him from the Eagles in the Bradford trade, Foles got a three-year contract and $13.8 million in guaranteed money.

But that was before Foles flamed out in his first and the team’s final season in St. Louis. He was bad in 11 starts, with only seven touchdowns to 10 interceptions. His completion percentage (56.4) was paltry, and his passer rating (69.0) was putrid. The Rams made the right call to bench him and finish the season with Case Keenum.

That should have been an indication to Foles that it was nice while it lasted, but it was time to reset his career. After regressing further, his 2013 Pro Bowl season with Chip Kelly’s Eagles looked more like a statistical anomaly than an actual breakthrough.

The Rams know they blew it — it’s unfortunate that Foles does not. They reminded of him his lower depth-chart status early in 2016, long before first overall pick Jared Goff came into play. General manager Les Snead, at both the NFL Combine in February and at the owners’ meetings in March, declared that if things stayed the same, Keenum would be the team’s Week 1 starter.

Also in March, Foles saw his $6 million roster bonus kick in. Those were 6 million reasons he should be a more willing participant in the offseason program, instead of being an all-out absentee. Foles is making the mistake of not using the time to prove his worth as a backup. Instead, he’s acting like the unhappy starter he no longer is.

When they moved up for the No. 1 pick, the Rams reportedly talked to a handful of teams about their interest in trading for Foles. More than a month since the draft, it’s becoming more evident that the Rams will need to release him.

But for another team considering Foles as a backup, wouldn’t it want to first see him accept being a backup? Demoted, disgruntled former first-stringers often don’t have the right makeup for that job. Foles’ actions indicate that he’d use a backup role elsewhere as a back door to compete for a starting job.

Some, like Eagles backup Chase Daniel, come into the league with the mentality for good. Others, after being humbled and becoming more realistic about their careers, are OK with either turning (David Carr) or returning (Brian Hoyer) to that role.

In that regard, Foles is worse than Bradford, who was looking for clarity about the mixed messages he received in Philadelphia. On one hand, the Eagles paid him $26 million guaranteed and projected him as the starter. On the other hand, they used the second overall pick on his replacement, Carson Wentz.

Foles can be only a little confused by the Rams. Since he isn’t in their key QB plans for 2016, it has to feel weird that he’s still on the team.

But for now, Foles is on the team. He might be upset that it’s as a No. 3, but he owes it to the Rams to at least go to work. It would be the best way to attract someone else. The best way to prove what he still can do on the field is to, you know, be on the field.

By not at least pretending to feel it as a backup, he’s not a desirable commodity. By not practicing with no leverage, he’s playing himself out of the league.