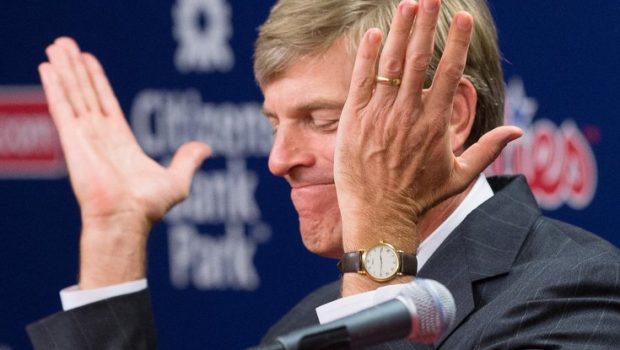 WILL PHILS MIDDLETON SPEND SOME OF HIS $3.4B ON FREE AGENTS?

We don’t know what the importance is of this figure unless Middleton is willing to kick in some of it to help the Phils sign free agents and get them out of their postseason drought that is now a decade long.

Here’s how Middleton got so rich:

John Middleton made his fortune selling his family’s storied tobacco business to Philip Morris’ parent, Altria, in 2007 for $2.9 billion in cash.

The original business, John Middleton Inc., was founded as a small retail tobacco shop in Philadelphia in 1856 by his great-great-grandfather.

The company began manufacturing cigarettes in the 1950s and launched the Black & Mild cigar brand in 1980.

Middleton bought out his relatives’ stakes in the company in 2003 for about $200 million amid tobacco lawsuits that threatened to harm the business.

Middleton has a nearly 50% stake in the Philadelphia Phillies baseball team.