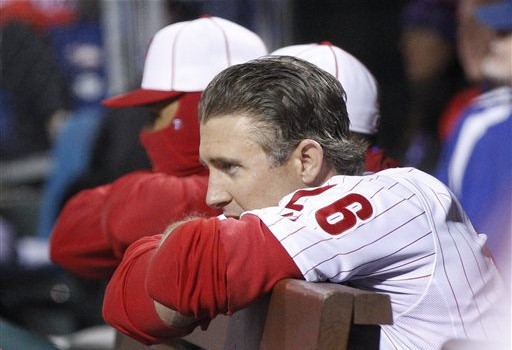 WILL PHILLIES UTLEY BE CLAIMED OFF WAIVERS BY 1 PM TODAY?

Did Chase Utley’s two-run double on Sunday that cinched the Phillies win at San Diego show that he can still hit well enough to help a contender?

That will be answered by 1 p.m. today.

Utley has been placed on revocable waivers, according to FOXSports.com.

The news is not surprising because teams place most of their players on waivers in August. If they clear waivers teams can trade them before the Aug. 31 waiver trade deadline.

The Fox report had Utley placed on waivers Sunday, which means he has until 1 p.m. EDT today to be claimed.

Of course, Utley has 10-and-5 no-trade rights, meaning he’s a 10-year veteran with at least the past five years on the same team, so he does not have to go anywhere if he does not want to.

But there are indications Utley is more open to a trade than he has been in the past.

“I would be more than happy to listen to them,” Utley said Saturday. “I do love Philadelphia. I’ve had a great time playing here, but out of respect for them, I would definitely listen to them.”

Asked Sunday if he expected to be with the Phillies at the end of the season, Utley said, “Who knows?”

The Angels and Cubs have expressed interest in Utley. The Giants had a scout watching Utley this weekend in San Diego, according to CSNPhilly.com.

Besides Utley’s 10-and-5 rights, a deal could be complicated. He is making $15 million this season, which means he still is owed about $4.5 million. He also has a $15 million club option for next season, which includes a $2 million buyout. The option automatically vests with 500 plate appearances this season, but Utley has only 259, so that is no longer an issue.