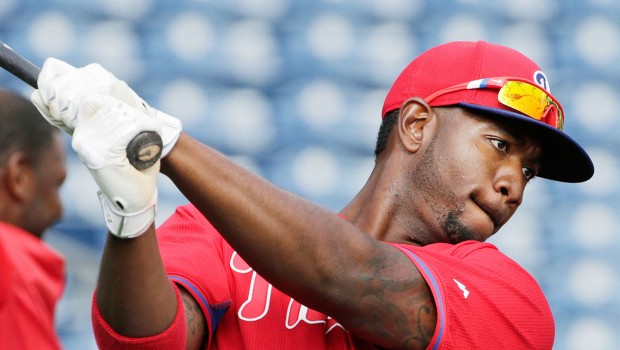 WHEN WILL PHILLIES GIVE UP ON BROWN — HITTING .195 IN MINORS?

It has been more than a month since Phillies fans have seen Domonic Brown, the underachieving outfielder who had one great month — May 2013 — in an otherwise mediocre career.

Brown, who left a spring training game March 20 with what was diagnosed as left Achilles tendinitis, has been rehabbing in the Phillies’ minor league system. In 12 games with Class A Advanced Clearwater and Triple-A Lehigh Valley entering Saturday, Brown is 8-for-41 (.195) at the plate.

Brown said he feels good and is just concerned about timing rather than his batting average and results. His 20-day rehabilitation assignment ends Tuesday, when a decision will have to be made on his status.

The Phillies previously announced they planned to use all of Brown’s rehabilitation time. They also stated they wanted Brown to face “advanced pitching” before he is activated.

Brown is not the only Phillies player rehabbing with Lehigh Valley. Right-hander Chad Billingsley was scheduled to make his third start for the IronPigs on Saturday night vs. Buffalo. He has a 3.24 ERA over his first two starts at Triple-A, working his way back from surgery to repair the flexor tendon in his right arm on June 24, 2014.