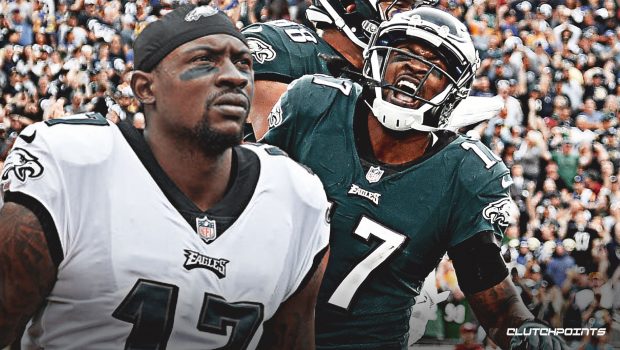 WILL JEFFERY STEP UP IN A CROWDED AND TALENTED EAGLES OFFENSE?

The Eagles have a stacked roster, and they’re just eight days away from opening training camp for the 2019 season.

All eyes will be on Alshon Jeffery, whose injuries have kept him from reaching his full potential, especially in the last four seasons during which he has missed 15 games combined.

With the additions of DeSean Jackson and J.J. Arcega-Whiteside, Jeffery should have some of the pressure taken off him. That could allow Jeffery to get as many as 70 catches in a crowded offensive group.

In Jeffery’s seven-year career, the talented wideout has never had fewer than 13 yards per reception. At 6-foot-3, 215 pounds, Jeffery is able to create mismatches against smaller cornerbacks.

As a result, Jeffery is able to make plays downfield over smaller defenders. This has allowed the Eagles; top receiver to maintain a career average of 14.5 yards per reception.

If Jeffery can have another season with at least 13 yards per reception, that should land him around the 900-yard mark. Jeffery has eclipsed 1,000 yards just twice in his career. The last time came in 2014 with the Chicago Bears.

Over his entire career, Jeffery has never been a touchdown machine by any means. In his seven seasons in the NFL, Jeffery has just one season in which he has hauled in double-digit touchdowns.

Therefore, it’s tough to assume that Jeffery will catch more than nine touchdowns in 2019. Last season, the Eagles receiving threat had six touchdowns. That number seems like a good goal for Jeffery to chase again in the upcoming season

The Birds offense has Zach Ertz, Jordan Howard, Jackson, Nelson Agholor, and Arcega-Whiteside alongside Jeffery. As a result, touchdowns are going to be hard to come by for the veteran receiver. When it’s all said and done, six touchdowns could be close to the team leader.