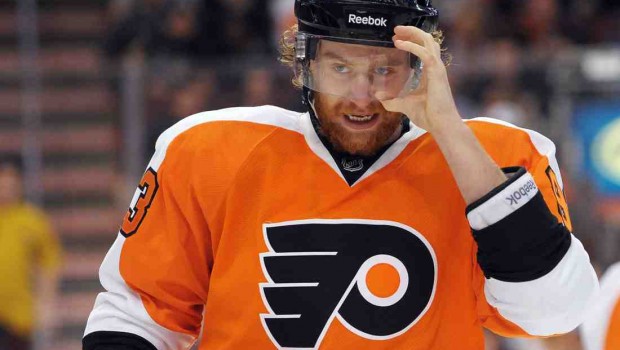 WILL VORACEK BREAK HIS GOAL-SCORING DROUGHT AGAINST DEVILS?

So, Vinny Lecavalier is coming out of hiding in tonight’s Flyers game with the New Jersey Devils.

What about Jakub Voracek.

Voracek is dealing with his own issues as he tries to end a season-opening goal drought. The right wing has three assists so far but no points in the last two games. He’s scored at least 22 goals in three straight seasons while his career-high 81 points last season led the team.

Voracek came up empty on a game-high six shots in Tuesday’s 4-3 overtime loss to Buffalo – Philly’s second defeat in its last six games (4-1-1).

“If you could pinpoint a reason why the puck isn’t going in, we’d all make a lot of money knowing that,” coach Dave Hakstol said. “He’s playing hard, he’s getting opportunities. He’s a good player; he’s a confident player. He’ll stay with it. Normally what you’d see in this situation is when he gets one, he’d get on a bit of a roll.

“We’re having some small successes as a team. Let’s be confident in that.”

A lower-body injury to Pierre-Edouard Bellemare has ruled him out for two weeks, joining center Sean Couturier (upper body) on the sidelines. Backup goaltender Michal Neuvirth (upper body), though, might come off the injured list.

Bellemare’s absence makes room in the lineup for Lecavalier, who has been a healthy scratch in all eight games for Philly (4-2-2). The 35-year-old center had eight goals and 12 assists in 57 games last season.

“He shows up at the rink every day and goes to work,” right wing Ryan White told the team’s official website. “He definitely hasn’t been a distraction.

“Vinny’s been in the league long enough that he’s seen this before with other guys, and it’s funny how the league kinda can get you sometimes. He’s been nothing but a good teammate and I can’t say enough about him.”

Despite Voracek’s inability to score, the Flyers have 10 goals in three games after scoring eight through the first five. Mark Streit only had one point over that stretch, but he has five in the past three contests.

The Flyers have lost four of their last five meetings with New Jersey.

The Devils (4-4-1) are trying to bounce back from Tuesday’s 3-1 loss to Columbus that snapped their four-game winning streak. They outshot the Blue Jackets 24-14 but gave up all three goals on six third-period shots.

“We gotta find a way to be able to put the puck in the net,” coach John Hynes said. “The structure is there and I think we all feel good about that.

“Offense also comes to execution. Whether that’s getting the puck on net at the right times, making sure we have to set up a guy for a one-timer that’s in his wheelhouse and not on his backhand.”

Adam Henrique leads New Jersey with six goals, but he didn’t manage a shot Tuesday. The left wing had three goals and two assists over the two prior games.

His nine goals and 15 points in 17 meetings with the Flyers are his highest totals against any opponent. Henrique had three goals and three assists in four match-ups last season.