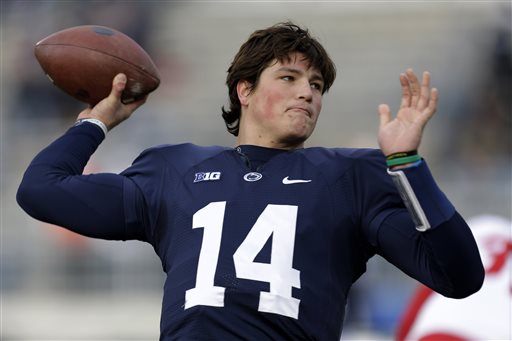 WILL HACK BE BACK AT PENN STATE IN ’16? DON’T COUNT ON IT

Will Christian Hackenberg be back for his senior season in 2016?

The Penn State quarterback hasn’t said, but if he’s going to consider heading to the NFL after this season, the Nittany Lions’ junior quarterback will have to start the process soon.

“I’m not really thinking about my future too much,” Hackenberg said after he threw for 257 yards, two touchdowns and two interceptions in Penn State’s 55-16 loss to No. 5 Michigan State on Saturday.

“I’m just focusing right now on getting better in what we need to do and working through everything from this whole season and putting it all together for one more game.”

Hackenberg can get an evaluation from the NFL’s scouting department on the range of rounds where he could expect to be drafted, a service provided to college players with a year of eligibility left who may be considering entering the league.

Hackenberg would be foolish not to consider entering the NFL Draft in 2016, especially after getting sacked for the 102nd and 103rd time and being hurried at least seven more against the Spartans on Saturday. Penn State’s beleaguered offensive line, after all, is looking at another year of transition next season.

If Hackenberg wants that evaluation, he’ll have to request it in the next few weeks leading up to whatever bowl game in which Penn State is selected to play. But Hackenberg maintained, on the record at least, that all he really cares about right now is that bowl game.

“To be completely honest with you, I haven’t looked into any of that,” Hackenberg said of the evaluation. “I don’t even know where to go, how that process goes. I just take practice one day at a time, really just try to get better and push my teammates.”