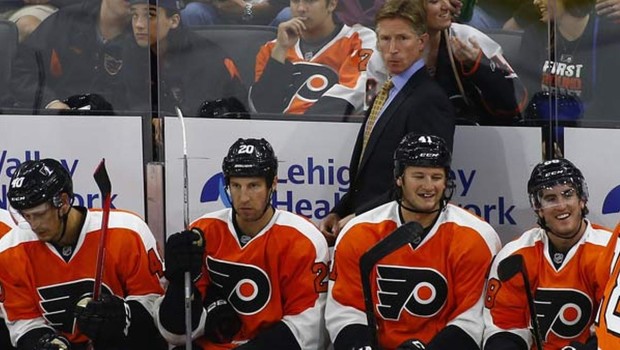 WHEN WILL FLYERS TIRE OF MAKING EXCUSES FOR WOEFUL COACH DAVE HAKSTOL?

The Flyers lost their fifth straight game last night, 5-2 to the Canucks at home, and the question must be asked:

Does Dave Hakstol have what it takes to coach this team into contention for the playoffs?

Judging by how long he stick with goalie Michal Neuvirth, the answer has to be no!

“That one was on me,” Hakstol said about pulling Neuvirth too late. “I should have done that after the third goal to give our team the best opportunity. Once it got to four (4-1), it’s tough to dig out of that hole. The change after three may have been the spark that our team would have needed, but hindsight is 20/20.”

“We had a tough time starting in the neutral zone,” Jake Voracek said. “A couple of times, the defense tried to skate it through. We just didn’t generate enough speed. On the odd-man rush we had a couple of good looks in the second [period]. It is always more open in the second.”

“That first goal is probably preventable,” Brandon Manning said. “Me and Ghost talked about it and we can probably sniff that one out a little bit better. The second one is tough with the young guys trying to get off for a matchup.”

“We gave up two easy goals that we didn’t make our opponent work for,” Hakstol said. “You’ve got to have one defenseman out there. You can’t have two D going. That’s the reality of it.”

“It’s just little details that are costing us games right now, and I think the PK needs to be better,” Sean Couturier said. “On the defensive side, we need to be sharper. Little details, whether that’s picking up your guy or chipping it out or line change. It’s all those little things that add up.”

“You’ve got to own it,” Hakstol said. “We’ve got to do better. You can’t sit back and rest on a lack of confidence. You give yourself confidence by preparation, work ethic, togetherness and those are things we have to put back into our game tomorrow night.”