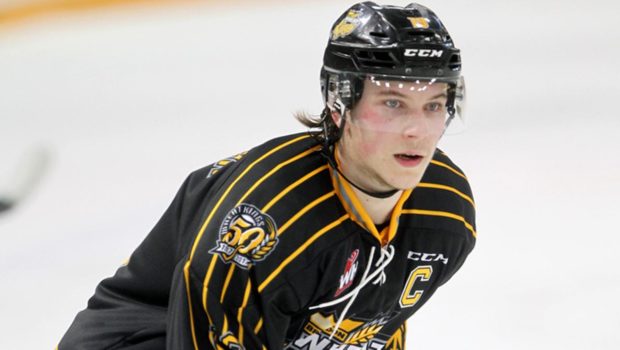 WILL FLYERS’ SURGICALLY REPAIRED PATRICK BE READY TO PLAY?

It’s been almost two weeks since the Flyers took Nolan Patrick with the No. 2 overall pick in the NHL draft after the Jersey Devils passed on him because he needed surgery.

Patrick missed a significant portion of the 2016-17 season while dealing with what he later learned were dual sports hernias. Patrick did not feel 100 percent healthy after his return to the Brandon Wheat Kings’ lineup but gritted his way through the season and continued to produce at a high level.

“This kid’s been bothered by this the entire season and actually played through it, which is a sign of how tough the kid is,” Flyers general manager Ron Hextall told NHL.com.

Patrick underwent successful surgery on June 13 to correct the remaining problem. He was given a four-to-six-week timetable to be medically cleared to play hockey again. Patrick will be able to participate in off-ice portions of the Flyers’ upcoming Development Camp but will not take part in on-ice work.

“Physically, my body’s feeling really good,” Patrick said as the club gathered for opening meetings at development camp. “I’m healing fast. I’m really excited to be here. Obviously, I would like to take part [on the ice] but coming here for my first development camp is exciting. It should be fun.”

In regard to his decision to have surgery – a step he took proactively in order to have more time to prepare for next season – Patrick said it was clear to him during the season that he was still having physical issues.

“I kind of knew something was wrong. It was bugging me throughout the whole season. So I saw one of the best doctors in the world in that area. …I needed to get it done, and I’m happy it’s done so I can move on now,” Patrick said.

Even playing at less than optimal health, Patrick produced at an elite level. This past season, despite both the injury setback and the fact that the Wheat Kings were no longer as stacked as the previous season (following the departures of Ivan Provorov and others to play in pro leagues), Patrick averaged a robust 1.39 points per game (46 points in 33 games).

Patrick’s hockey pedigree and development path to date are both outstanding. By age 16, he was a 30-goal, point-per-game player for Brandon in the Western Hockey League. By 17, playing for a powerhouse Wheat Kings club that won the Western Hockey League championship, Patrick racked up 102 points in 72 regular season games (1.41 points per game) and then added 30 more points in 21 playoff tilts.

Apart from his goal-scoring and playmaking prowess, Patrick boasts a combination of size (6-foot-2 with a broad frame), agility, natural hockey sense and upside for two-way awareness at the NHL level, as well as leadership potential. He was an alternate captain for the Wheat Kings in 2015-16 and wore the “C” this past season. Patrick doesn’t make a lot of flashy plays with the puck but knows how to create time and space for himself.

Patrick’s parents, two sisters and uncle James were all in Chicago for Friday night’s First Round to be alongside him when his hard work and dedication to the game were rewarded with being selected second overall by the Flyers. He gave special thanks to his dad and uncle James for their unwavering support.

“They’ve been my two biggest role models through everything. They’ve helped me since I was young, and my dad is a little different than my uncle, their personality is a lot different. My dad is a goof and he’s always making jokes and my uncle is a little more serious, so they’ve both been huge for me,” Patrick said after the NHL Draft.

Patrick’s own personality is one of strong self-confidence and poise. His ability to filter out outside “noise” – whether it was the daily bombardment with questions about his ultimate draft position, working through the injuries or being constantly compared to fast-rising Nico Hischier – has served him well thus far.

“I wasn’t too nervous [about Draft day]. I just was trying to expect whatever and be ready for anything, so it — I’m really happy how it played out. I’m really happy to be part of the Flyers organization, and I’m really excited to see where it goes from here,” Patrick said.