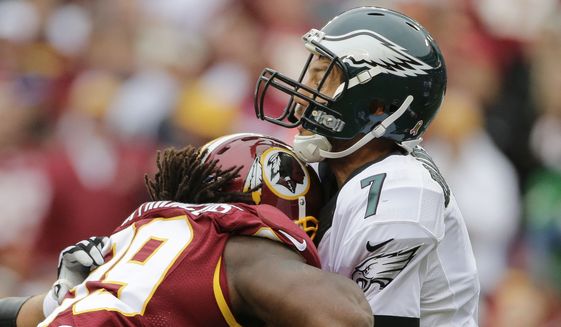 Since the Eagles are off this week with a bye, the speculation has already started about whether quarterback Sam Bradford and the Birds will wave each other:

Bradford ranks 32nd (last) in Total QBR among qualifying quarterbacks this season. He ranks 28th out of 30 qualifiers since entering the league in 2010.

“I don’t know Sam at all, but I think eventually when you are in the league, you are what you are,” a player from another team told ESPN before the 2014 season. “This is what, five years for him?”

It’s Year 6 now, and Bradford, who is in the last year of his original contract signed with the Rams who traded him to the Eagles, is seven games into his return from a second torn ACL. Arizona Cardinals coach Bruce Arians has said evaluating quarterbacks in new systems becomes viable after about eight games.

Bradford and the Eagles have a bye this week before visiting Dallas for their eighth game.

“I can see someone signing Bradford if he stays healthy all year,” one of the GMs said, “and I could see the Eagles just letting him go.”