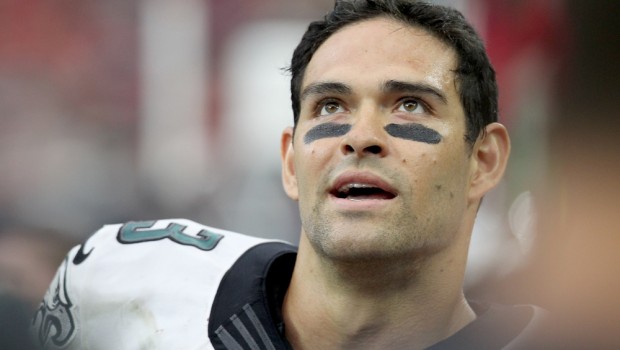 WILL EAGLES’ WASHOUT SANCHEZ EVEN MAKE THE BRONCOS’ FINAL 53?

Former Eagles washout quarterback Mark Sanchez is staring at the end of his woeful career.

Sanchez arrived in Denver after a trade from the Eagles as an eighth-year player with 72 NFL starts. He wasn’t promised anything, but was penciled in as the potential starting quarterback and said, “I’m thrilled with the opportunity.”

When the Broncos selected Paxton Lynch in the first round of the draft instead of signing another veteran quarterback in free agency, Sanchez was asked if he took that as a vote of confidence. “That’s the message I’ve received,” he said.

Now, almost four months later, it’s the guy who was already with the Broncos when Sanchez and Lynch arrived — Trevor Siemian — who has the inside track to be the starting quarterback. Siemian will start Saturday’s preseason game against the Los Angeles Rams and is likely one more quality half of football from being named the starter for the Sept. 8 regular-season opener against the Carolina Panthers.

Lynch, has put himself in consideration to be the team’s backup if Siemian wins the starting job. Lynch, even with a significant learning curve because of the difference between the offense he played in at Memphis and the one he’s in with the Broncos, isn’t going anywhere. He’s the prospect in waiting — the player the Broncos selected with the long-term plan in mind — and coach Gary Kubiak has given him a ton of praise for his progress.

That was evident Monday when Kubiak would not say if Lynch or Sanchez would enter Saturday’s game after Siemian.

If Siemian holds serve and is named the regular-season starter — and if, after Saturday’s game, the Broncos think they’ve seen enough from Lynch to make him the No. 2 quarterback — it’s unclear what it would mean for Sanchez. If he was the No. 3 and remained on the roster he would be the team’s highest-paid quarterback and a game-day inactive.

From a salary-cap perspective, because Lynch is a rookie and Siemian is working under his rookie deal signed as a seventh-round pick in 2015, the three Broncos quarterbacks count a total of $6.811 million against the salary cap, far less than many teams’ starting quarterback counts against the cap.

Sanchez is the highest-paid of the three by a long shot, counting $4.5 million against the cap. If the Broncos were to release Sanchez because they believe Lynch could be the team’s backup, the team would take a $1 million dead-money hit against the salary cap and would have to pay the $1 million that is fully guaranteed in Sanchez’s contract.

If the Broncos decide on a Siemian-Lynch depth chart, they could also try to trade Sanchez. He is set to be an unrestricted free agent at season’s end, so a team would only be taking on the last year of his current contract.

Following this past Saturday’s preseason loss to the San Francisco 49ers, Sanchez believed he had “squandered” the chance to be the front-runner, as he fumbled twice. Sanchez has three turnovers in just over two quarters of play.

“I squandered a great opportunity to separate myself and put the team in a bad situation,” Sanchez said following the game. “No excuse for that poor, poor quarterback play.”

Sanchez was also asked if it was difficult to not know who would be the team’s starter so deep in the preseason. He simply said: “It’s difficult playing like crap on two plays and ruining an opportunity. That’s difficult.”

“That’s Mark; he’s a competitive guy,” Kubiak said Monday. “He talked about opportunity. I saw some of the comments. That’s the type of guys you want out there battling every day. I’m proud of all of them. They’ve been working hard. … Mark is a competitor. He’ll bounce back.”