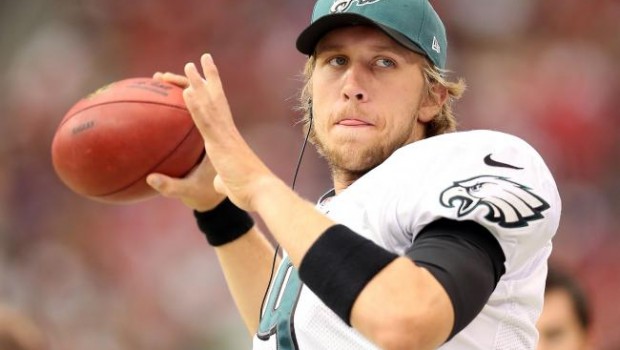 WHEN WILL EAGLES BE STRAIGHT WITH US ON NICK FOLES’ SORE ARM?

Excuse me for pointing this out, but:

A quarterback’s throwing arm would seem to be an important appendage.

And if said quarterback is Eagles’ back-up Nick Foles, one has to wonder when his sore arm will heal in time for him to actually play behind Carson Wentz.

Foles missed two weeks of practice while dealing with a sore arm before returning during the team’s joint work with the Dolphins this week. He didn’t play against the Dolphins on Thursday, however, and coach Doug Pederson said it was because the return to work led to a return of the soreness.

“Again, with him, he got a little sore during the week with the Dolphins,” Pederson said in comments distributed by the team. “He had a lot of throws because he missed so much time early in camp, and then coming back, he got more throws [and] more intense throws against the Dolphins. It just got a little sore on him, so I just didn’t want to push him. Again, the more rest that you can get on that elbow, the better. I’m confident with Nick having coached him in the past and [with him] being a veteran quarterback and understanding our system. The rest will definitely help him.”

The fact that the rest hasn’t helped him at this point means the Eagles will have to at least consider other possibilities. Matt McGloin, the current No. 3 on the depth chart, has gone 62-of-88 with a touchdown and three interceptions in three preseason appearances and any doubt about Foles’ ability to take over for Wentz may leave the Eagles with a choice of keeping him on the active roster or looking elsewhere for another backup option on the eve of the season.