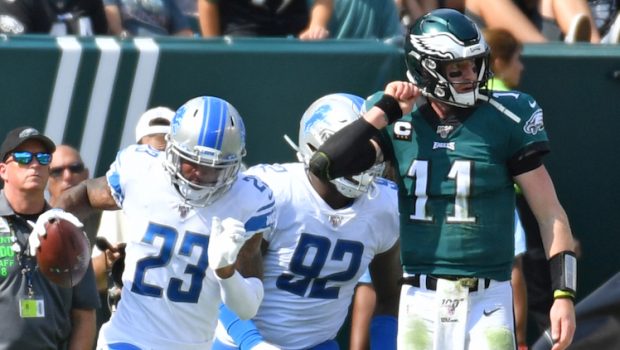 While the Eagles beat the Patriots in what was perhaps one of the most exciting NFL games ever — a 41-33 stunner in Super Bowl 52 — star quarterback Carson Wentz watched from the sidelines, having passed the baton over to Nick Foles following an injury.

Wentz was in the race to become the MVP of the 2017 season before an ACL injury cut his season short.

The 2017 season best sums up Wentz’s career. While some days he’s the best quarterback in the league, on other days, his performance can be questionable. At the height of his form, Wentz is an elite quarterback, but reliability has always been an issue. His on-field performance is either overrated or underrated, and it’s difficult to get an accurate reading of his current form.

Can Wentz live up to his potential in 2020? It’s anybody’s guess!

Let’s be honest! Wentz can’t pull off a Lamar Jackson or a Patrick Mahomes or even an Aaron Rodgers on his best days. Even though Tom Brady and Drew Brees are over 40-years old, nobody in their right senses would pick Carson Wentz over Brady or Brees. That speaks a lot about his position in the potential list of top 10 QBs of the season.

A recent report analyzed Wentz’s current position in the league, and the breakdown suggested it’s not fair to compare him to the others owing to the numerous downturns this season.

Wentz has suffered countless injuries, and even when he’s healthy, support from receivers has been hard to come by.

With a supportive squad for backup, it’s possible a healthy Wentz could play up to his full potential, even putting strong numbers on the board. But he hasn’t had that chance yet. A fair number of quarterbacks have struggled for support through their entire careers before finally making it happen. There’s still hope for Carson Wentz.

The man is 27 years old and has nearly a decade of great games ahead of him. With age on his side, Wentz proved that he could make a comeback from serious injuries. However, continuously missing from major parts of the season is concerning.

Up until 2020, Wentz proved that he’s willing to walk the extra mile to improve his performance, and a breakthrough could be in store for him in the latter part of the season.

Although Wentz barely played 40 games in the last two seasons, his average of two touchdowns per game is at par with, if not better than, most QBs. Wentz is a capable leader, is skilled with the ball, and knows how to work with the squad. It won’t be surprising to see him dominate the next season if he manages to avoid injuries.

But can he hope to someday make it to the list? Absolutely! If you enjoyed this story and would like to read more, visit NJ Punter.

Follow this link for sports betting sites in New Jersey.