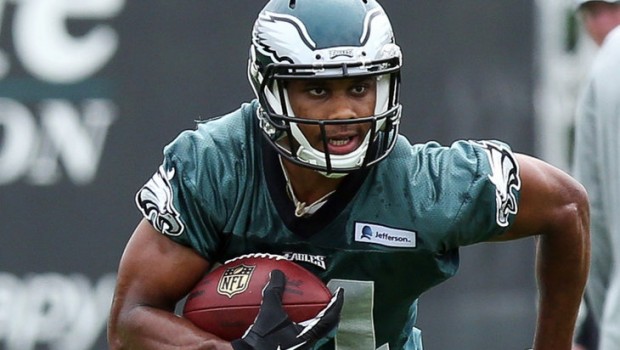 In the meantime, Matthews, he Vanderbilt product and second round draft choice, spent extra time refining his blocking skills this week because Eagles head coach Chip Kelly said Wednesday that the team doesn’t have plans to move Matthews from the slot to the outside anytime soon.

“Could you [move him outside]? Yeah. Are we? No,” Kelly said prior to Wednesday’s practice. “He’s playing slot receiver for us right now. To move him outside, that doesn’t help us in terms of where we are. We need to have a big, physical slot in there, that’s really what we’re looking to do right now and he’s still got a long ways to go as a slot receiver.”

Matthews had a breakout performance in Week 3 hauling in his first two career touchdowns in an eight catch for 59 yard game against the Washington Redskins.

Through the first quarter of the season Matthews is third on the team in receiving with 15 catches for 141 yards and two scores. The Eagles only have six passing touchdowns so far this season and the rookie receiver accounts for one third of them.

At 6-foot-3, 212 pounds Matthews certainly fits the bill for the bigger receiver that Kelly covets in his offense, specifically in the slot where the receiver is responsible not only for underneath routes but also plays a key role in run blocking as well. Matthews has the build, but perhaps more importantly he seems to have the drive to succeed in that role as well.

After a sluggish start in the preseason and accounting for just three catches in the first two games, Matthews has come on like gangbusters in the past two weeks accounting for 12 receptions for 87 yards and two touchdowns over that span.

“I think it just comes down to me being more comfortable out there in the offense,” Matthews said. “Nick [Foles] is already an elite quarterback. You can put anybody out there and Nick can make him look good.

“I’m just getting more comfortable so the more comfortable I get, the better that’s going to be for both of us. Of course, you can’t overlook practice because we go out there and practice with a purpose. We don’t just go through the motions, we go full speed, Nick’s finding me in certain spots on the field that he thinks he can hit me in the games and it’s showing up on film each Sunday.

“We just have to keep building, getting better at it and I think it’s going to help us a lot.”