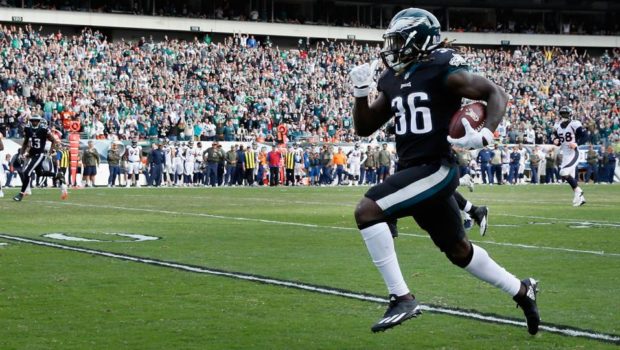 WILL EAGLES’ JAY AJAYI GET ENOUGH SNAPS TO BE FANTASY PICK?

Week 12 is upon us, with the Eagles tangling with the Bears tomorrow at the Linc.

So, whom should you be focusing on in fantasy?

In two games with the Eagles, Jay Ajayi ranks third in snaps played overall and in the red zone.

Offensive coordinator Frank Reich admitted this week that they’d like to give Ajayi more snaps in the long run but also intimated that he and LeGarrette Blount are interchangeable and one would stay on the field longer if they don’t want their opponent to make defensive personnel changes.

Another takeaway is that in consecutive weeks the Eagles have used a running back not named Ajayi to salt their blowout wins away in the second half — Ajayi has three fourth-quarter snaps in two games combined. So unless he busts a long run, Ajayi will need more work than the 16 touches he’s had in two games to be a reliable starter for your squad.

0 thoughts on “WILL EAGLES’ JAY AJAYI GET ENOUGH SNAPS TO BE FANTASY PICK?”