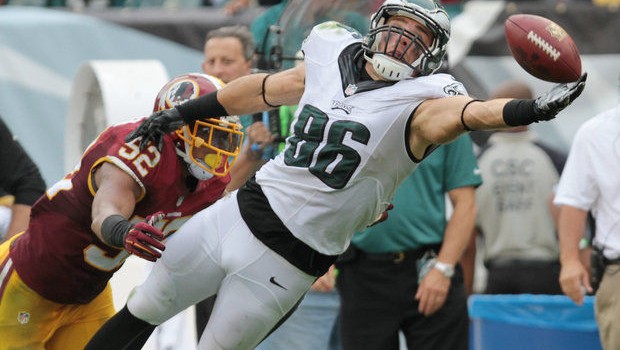 WILL EAGLES’ ERTZ BE READY NEXT MONDAY TO BE OF FANTASY VALUE?

Here we are, six days before the Eagles’ Monday Night Football 2015 opener at Atlanta, and no one knows for certain whether or not:

Tight end Zach Ertz will be there; let alone be healthy enough to contribute, let alone what his Fantasy Football value is!

Chip Kelly’s second season confirmed that he prefers a run-blocking veteran at tight end. In other words, he does not care about your fantasy team. Brent Celek (profootballfocus.com’s No. 2 blocking TE in 2014) saw the field 70 percent of the time compared with the flashier Ertz’s 50 percent.

This year is shaping up to be no different, as the popular breakout pick has failed to win the starting job over Celek for a second consecutive summer. Ertz is also rehabbing his way back from groin surgery and is questionable for the Eagles’ Week 1 opener against the Falcons.

His 5.4 weekly fantasy scoring average ranked 17th among tight ends last season, and expecting a leap into top 10 tight end territory from a part-time player does not make a lot of sense.