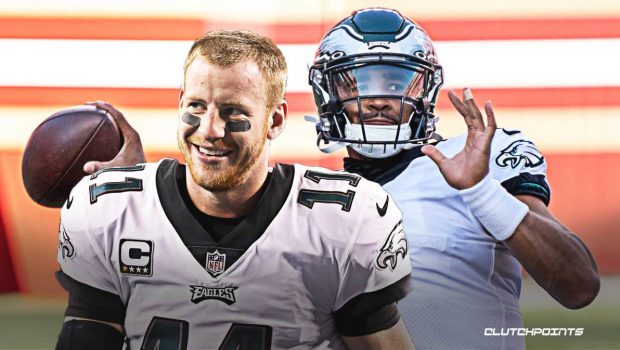 EAGLES OFFENSE: DUMBED DOWN FOR HURTS AS IT IS FOR WENTZ?

When the Eagles take the field tonight against the Seattle Seahawks, Carson Wentz will be their starting quarterback.

But Jalen Hurts is expected to receive increased playing time at quarterback, and unlike previous snaps, Wentz won’t be on the field. It will be the first time in 2020 that this dynamic will take place.

Doug Pederson has said he has had to simplify the offense for Carson Wentz. It will be interesting to see if he does that for Jalen Hurts tonight if/when he gets in. #Eagles

It’s unlikely that Hurts, the second-round Heisman finalist from Oklahoma and Alabama, will get to take an entire series. More likely, it will be two or three plays at a time. But, based on the game plan and the week of practice, he should see his most significant snaps yet.

Hurts played one snap last Sunday against the Cleveland Browns. When he’s had his plays — 12 carries for 56 yards, one catch for three yards and 2-of-2 passing for 27 yards — Wentz has been on the field. That figures to change Monday.

One source cautioned that outside factors can cause things to change on gameday. But this has been the plan all week. Hurts likely has a package of plays to choose from, though head coach Doug Pederson would not commit to it this week.

And it did sound like Wentz, intent on turning things around, had a good week of practice.

Asked if he was making a move to a different quarterback, Pederson said, “I would say no.”

One thought on “EAGLES OFFENSE: DUMBED DOWN FOR HURTS AS IT IS FOR WENTZ?”