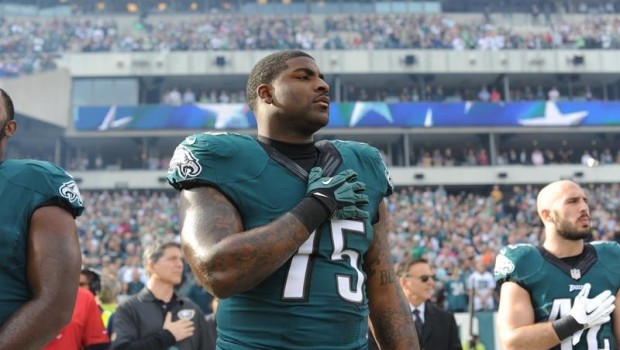 WILL DE VINNY CURRY PEDGE ALLEGIANCE TO EAGLES AFTER SUNDAY?

Eagles defensive end Vinny Curry grew up in Neptune City, N. J., so when he was a kid he was a New York Giants fan.

Call it a geographical imperative.

And now, as the Birds and Curry prepare for Sunday’s meaningless game against Big Blue at MetLife Stadium, he is facing the real possibility it could be his last game in Midnight Green.

The pass-rushing end will become an unrestricted free agent in March and appears resigned to the fact that he’s headed somewhere else. Maybe to the team he’s facing this week.

Curry knows what he wants — to be back in the 4-3 that helped him become a second-round pick out of Marshall.

“Absolutely,” he said. “I have to be true to myself and do what’s best for me and my career. I want to be where my talents will be best used. As far as free agency, I really haven’t thought about where I want to go. I mean it’s my first time as a free agent, so it’s going to be interesting. ”

A quick look at depth charts around the league show six teams who employ a 4-3 front and could use a pass-rushing end: the Cowboys (if they get rid of Greg Hardy), the Giants, the Panthers, the Raiders, the Jaguars and the Bucs.

And the Giants, who released Damontre Moore earlier this year and have to make a decision on Jason Pierre-Paul, might be at the top of the list. Curry smiles when he hears that a team from his native state might be interested.

“It wouldn’t be a long drive,” he says with a laugh.