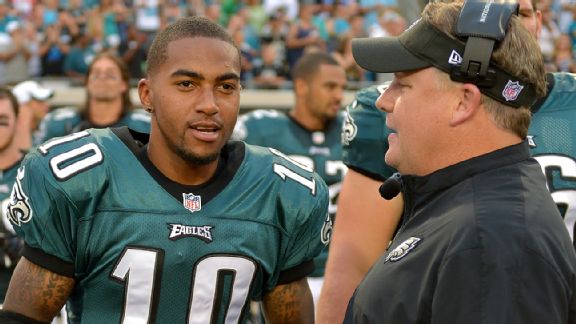 WILL D-JAX BE THE EAGLES’ GHOST OF CHRISTMAS PAST?

In 2013, Jackson and Kelly were best buds; how about tonight when the Redskins come to the Linc for a showdown with the Eagles?

It’s the day after Christmas

and all through the Linc

a personnel decision made 21 months ago

is starting to stink!

Chip Kelly has always maintained that cutting DeSean Jackson was a ”football decision” but teams don’t part ways with their most productive players without cause.

Jackson is only 5-10and 178 pounds and Kelly prefers bigger, stronger receivers. There’s one side of the football part of his decision. The other was his contract. He was scheduled to make $10.7 million in 2014. But the main reason Jackson was let go was he didn’t fit the ”culture” Kelly was building in Philadelphia.

Kelly wants team-first, unselfish players who put wins ahead of personal stats. Though he never said Jackson wasn’t that guy, the receiver had a reputation for a diva attitude. Various reports said he pouted if he didn’t get the ball, he was late for team meetings and he was insubordinate to Kelly.

Jackson later blamed the Eagles for these media reports, calling it a ”smear campaign.” He’s keeping the grudge to himself 21 months later.

”I’m happy to be here in Washington, and I’m not looking back,” Jackson said this week. ”It’s in the past and it’s over and done with. I’m happy where I’m at now. I’m blessed to say I have a job and still playing at a high level.”

It was the first of several unpopular moves Kelly has made, and it cemented his image as an autocratic coach.

Jackson quickly landed with the Redskins after his release in March 2014, signing a three-year deal worth $24 million, with $16 million guaranteed.

He’s played a key role in helping Washington go from worst to first in the NFC East. Now, he has a chance to really stick it to Kelly.

The Redskins (7-7) can clinch the division title with a win in Philadelphia on Saturday night. The Eagles (6-8) need a win to avoid elimination.

”We know we need to do something that we haven’t been able to do in (three) years,” Jackson said. ”So, we just want to take care of the opportunities that are handed to us. That’s at stake right now, which is win a football game. Regardless of anything else, I’m not going to let it be bigger than what it is.”