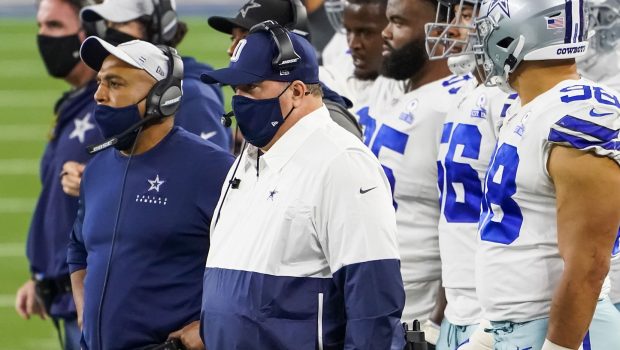 WILL COWBOYS MCCARTHY KEEP HIS JOB FOR EAGLES GAME ON SNF?

It’s Dallas week in Philly, so get used to a lot of blather about the old days when Michael Irvin got pummeled, Jimmy Johnson had his hair mussed up and sports talk radio was aflame with phony Cowboys fans.

Those days are over.

And so, it seems, are the Cowboys, who come to the Linc Sunday night.

“I know we’ve got the right head guy for the job,” Jones said during a Monday appearance on radio station 105.3 The Fan, per Nick Shook of NFL.com. “These things just take time. I know our fans are frustrated. We certainly understand the criticism that’s come our way. But we’ve got to go to work.”

“You know (Cowboys owner Jerry Jones) and I are big believers in sticking with the staff,” Stephen Jones added. “We’ve just got to give them their opportunity to work with these guys and continue to implement what they’re trying to get accomplished.”

McCarthy can’t be blamed for his team’s deficiencies at quarterback this fall. Starting signal-caller Dak Prescott was lost for the year due to the horrific leg injury he suffered during what became a 37-34 win over the New York Giants on Oct. 11. Former Cincinnati Bengals starter Andy Dalton replaced Prescott and guided Dallas to a comeback victory against the Giants but underwhelmed over the last two games. Even worse, Dalton went down to a concussion in the third quarter of Sunday’s loss to Washington and may not be available for a Sunday night showdown with the Eagles.

Ben DiNucci will start for Dallas if Dalton isn’t cleared by the weekend.