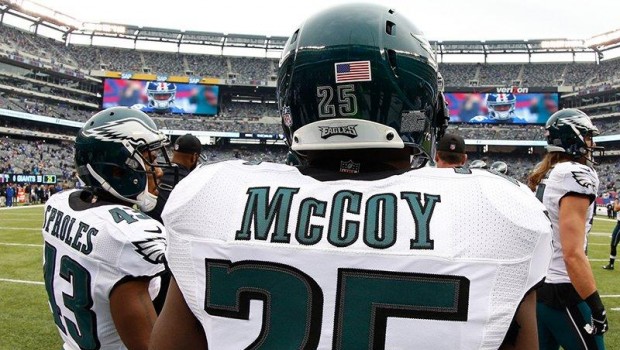 WILL BIG BUCKS BACK MC COY RETURN TO EAGLES IN 2015?

After the Eagles’ disappointing 10-6 season that left them out of the playoffs they made last season, there are a lot of elephants in the room:

Issues that need addressing but no one will talk about.

The biggest of these is whether running back extraordinaire LeSean McCoy will return in 2015.

“We’ll see,” McCoy said after the Giants game. “I can’t control it.”

What McCoy can’t control is the possibility that the team might release him next season due to a contract that is set to pay him $9.7 million, with a cap hit of $11.95 million.

The idea of McCoy not being with the team next years has been discussed throughout this season, especially as the running back has struggled at times.

“You think about it,” McCoy said. “I would be lying if I said I never thought about it. I don’t know. I really don’t know.”

McCoy rushed for 99 yards on 17 carries against the Giants on Sunday. In a season filled with injuries to his offensive line and a lack of quality play from the quarterback position, McCoy still finished with 1,319 yards, the second highest total of his career.

“I do my best on the field. I’m not perfect,” McCoy said. “There are room for improvement in my game…I’ll continue to address this offseason…As a player, they know what I can, what I’m willing to do. They know what kind of production I’m going to bring.”

If the Eagles do move on from McCoy, it will mark the second straight season they decide to let go of a Pro Bowl player at a skill position, something the running back mentioned when speaking about his future.

“It happened to (wide receiver DeSean Jackson, who was also making $10 million a year) off of his best year,” McCoy said. “But he went somewhere and got paid. So there are some negatives, but it’s a lot of positives too.”

Jackson ended up signing with the Washington Redskins, and has had a very successful first campaign with his team team, totaling 54 receptions for 1,083 yards and five touchdowns. Last week, Kelly said the team was still confident in their decision to let Jackson go.

When asked about the idea that a team can plug in players at running back and still get production, McCoy strongly disagreed.

“I don’t believe that,” McCoy said. “A couple of years I’ve been playing at a certain level…and to the outsiders, nobody cares what the problem is. They see the numbers. You show them numbers. That’s what matters. That’s what I’ve learned.”

McCoy was clear that he did want to return to the Eagles, the team where he holds the franchise record for career rushing yards.

“I have a pretty good relationship with Chip,” McCoy said. “He is the boss. I move when he moves. Whatever he thinks or says, I do…We got great people upstairs from Howie, to coach Kelly, to Mr. Lurie. I’m waiting to see how it plays out.”

With the season now over, McCoy’s future will soon have to be addressed.