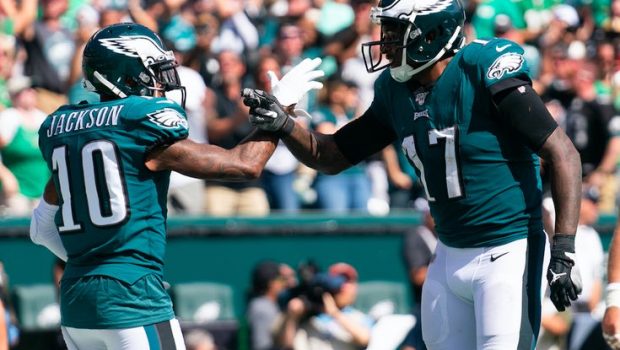 WILL JEFFERY EVER PLAY AGAIN FOR EAGLES? D-JAX READY FOR GIANTS! Oh, and he does not expect wide receiver Alshon Jeffery to make his 2020 season debut!

Jackson suffered a hamstring injury in Week 3 against the Bengals and has missed the past three games. Johnson had surgery during Training Camp to repair an ankle injury, but the injury has lingered into the season. Johnson has been in and out of the lineup this season. He was replaced last Sunday by rookie Jack Driscoll, who exited the game early with an ankle injury of his own. Maddox suffered an ankle injury in the Week 3 Bengals game and also missed the last three games. Against the Bengals, the Eagles started Nickell Robey-Coleman opposite Darius Slay and moved Jalen Mills back to safety. Mills returned to cornerback for the games against the 49ers and the Steelers.

One thought on “WILL JEFFERY EVER PLAY AGAIN FOR EAGLES? D-JAX READY FOR GIANTS!”