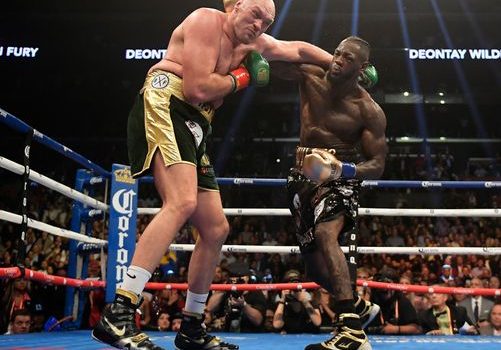 WILDER AND FURY BATTLE TO A DRAW, WITH A REMATCH NEXT UP!

Deontay Wilder and Tyson Fury fought to a split decision draw in their heavyweight championship fight in Los Angeles.

Wilder, the 6-7 WBC champion, scored two knockdowns — one in the nint

Fury, the 6-9 Englishman, picked himself off the canvas at Staples Center and beat the 10-count both times.

“I think with the two knockdowns I definitely won the fight,” said Wilder. “We poured our hearts out tonight. We’re both warriors, but with those two drops I think I won the fight.”

The crowd of 17,698, with a heavy presence of British fans, booed long and loudly when the decision was announced. But they cheered often during the fight, especially when Fury used his dodging and ducking and showboating to keep Wilder off balance.

“I’m what you call a pro athlete that loves to box. I don’t know anyone on the planet that can move like that,” Fury said. “That man is a fearsome puncher and I was able to avoid that. The world knows I won the fight.”

Judge Alejandro Rochin of the United States scored it 115-111 in favor of Wilder, judge Robert Tapper of Canada scored it 114-112 in favor of Fury and judge Phil Edward of England scored it a 113-113 draw.

“This decision is a joke, Alejandro Rochin better never work another day in his life again in boxing,” Showtime boxing analyst Paulie Malignaggi said after the bout. “I can’t tell you why the result is way it is. I don’t even know what to tell you.”

Wilder, who was 40-0 with 39 knockouts entering the fight, finally landed with his thunderous blows in the late rounds. But after being in control for a majority of the early rounds, Fury managed to survive Wilder’s onslaught to remain on his feet.

A rematch appears to be a sure thing

“I would love for it to be my next fight,” WIlder said during an in-ring interview at Staples Center. “Why not? Let’s give the fans what they want to see. It was a a great fight and let’s do it again. It doesn’t matter to me where we do it.”

Fury endorsed the idea a sequel, too.

“One hundred percent we’ll do the rematch,” Fury said during an in-ring interview. “We are two great champions. Me and this man are the two best heavyweights on the planet.”