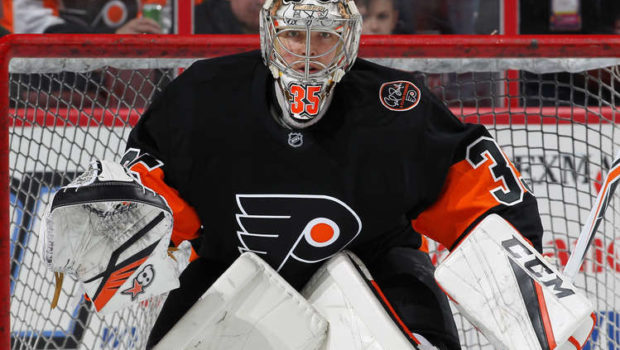 The Flyers long and lonely road down the rabbit hole of the playoffs hits Minnesota tonight.

If the Wild win, they would clinch their fifth consecutive trip to the playoffs. A Flyers win in Minnesota would be a rarity, as the team has struggled on the road.

The Flyers come in with a 2-4-0 record in their last six games, and a loss in Winnipeg on Tuesday typified the troubles the Flyers have had while wearing the road white sweater in the past few months.

“That’s been a difference for us,” Flyers coach Dave Hakstol said of his team’s road woes. “That’s how it is right now. This is one we needed here that we didn’t get on the road.”

In Winnipeg, the Flyers got off to a slow start, unable to get a shot on goal for a large portion of the first period. But the coach said the lack of shots didn’t mean a lack of effort.

“Sometimes shots on goal aren’t indicative,” Hakstol said. “There were some pretty good plays that weren’t on goal. Both teams came out and had some opportunities, but there wasn’t a whole lot on net.”

After miserable results for much of March, the Wild finally got back on the winning side of things in their last game, surviving a slog with the San Jose Sharks to win 3-2 and snap a five-game losing streak. It was a positive for sure, but Minnesota coach Bruce Boudreau said he wants to see more before he believes his team is completely out of the funk that may have cost the Wild a chance to hang a Central Division champions banner.

“Anybody can do anything once,” Boudreau said. “So let’s see how we do Thursday.”

Martin Hanzal, for whom the Wild paid a high price to acquire from the Arizona Coyotes in late February, has now scored exactly once, credited with his first goal in a Minnesota uniform in the win over San Jose. He didn’t even know he had scored until seeing a replay of a goal originally credited to Jason Pominville, but he liked the boost in confidence the Wild got from just finding a way to win.

“It was a huge victory for us right now,” said Hanzal, who has battled illness since the trade, in addition to his offensive struggles. “The way we were playing the last few games, sometimes it was even unlucky games we lost, but this was a really a huge win for us. It’s going to build the confidence of the team.”

As always, much of the Wild’s success or lack thereof will hinge on Devan Dubnyk’s play in goal. His win over the Sharks was Dubnyk’s 37th of the season, which is a career best and tied a Minnesota record.

The Wild are playing four of their final five games in March at home, giving them ample chances to clinch a playoff trip before a friendly audience.