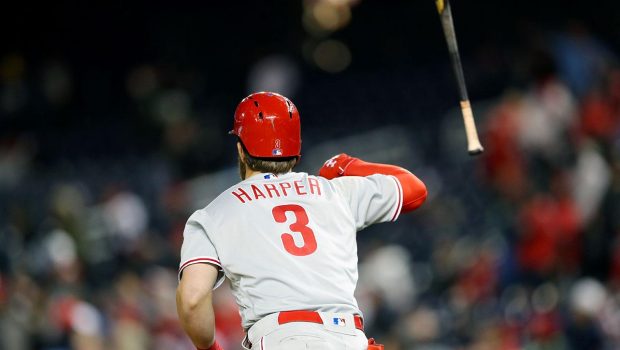 The Phillies start their post-All Star-game portion of the season at 47-43, 6 1/2 games behind the Atlanta Braves in NL East, and a half-game behind the Washington Nationals, who are in second place.

And the Nats have been coming on like gangbusters:

They were 12 games below .500 after 50 games and have a great incentive to sweep the Phils this weekend at CBP.

Washington is a scorching 28-11 since May 24 to put itself back in the playoff conversation. The Nationals are six games behind the first-place Atlanta Braves and hold the NL’s top wild-card spot.

“Everything’s going really well right now,” Nationals second baseman Brian Dozier said. “I love how we overcame a lot of things in the first month and a half. Things had to turn, and we made it happen.”

The Phillies (47-43) have faded in the other direction even though they currently hold the NL’s other wild-card spot.

They went 14-21 to conclude play prior to the break after being 11 games over through 55 games.

“As a team, we’re not where we want to be, obviously,” All-Star catcher J.T. Realmuto said. “We had a bad last month.”

The offseason addition of former Washington star Bryce Harper was supposed to propel the Phillies into kings of the division.

But Harper’s season hasn’t been up to par.

He does lead the team with 62 RBIs but his 16 homers are tied for 33rd in the NL. He also is batting just. 253 while striking out a whopping 105 times, fourth most in the majors.

The $330 million man didn’t even make the NL All-Star team. He is 10-for-37 with two homers against the Nationals this season.

There is also chatter that the front office soon will have to make a decision as to whether the team is a true contender. If not, some veterans may be moved, but Realmuto is pretty sure the verdict will be yes.

The Phillies will face a tough challenge in the opener as they oppose Nationals right-hander Stephen Strasburg (10-4, 3.64 ERA). Strasburg routinely pitches well against Washington and has a 12-2 record and 2.72 ERA in 25 career starts in the matchup.

In 2019, Strasburg, 30, has won his past three starts and is 7-1 over his past nine outings. He dominated the Miami Marlins in his most recent start on July 3 as he struck out a season-best 14 and gave up just two hits over 7 1/3 scoreless innings.

“I was able to execute from the get-go,” Strasburg told reporters after the strong effort. “I was working on a couple things in the bullpen between starts. The changeup’s kind of gotten away from me. I just tried to get back to basics, and it seemed to be much better.”

Strasburg was torched for six runs and six hits in four innings during a no-decision against the Phillies on April 9.

Third baseman Maikel Franco is 9-for-27 with three homers against Strasburg. Realmuto (11-for-28) and Jay Bruce (9-for-25, one homer) also have fared well.

Washington All-Star third baseman Anthony Rendon is 10-for-18 with four homers and 10 RBIs against Pivetta.