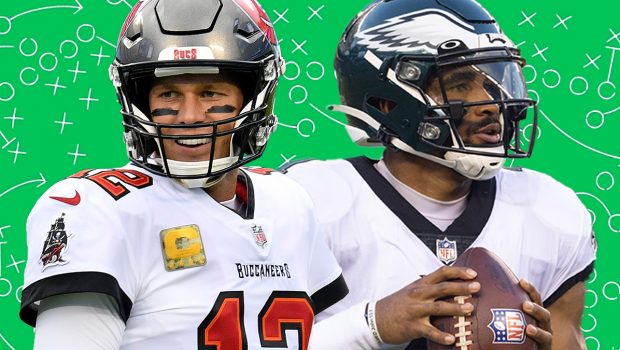 Everybody’s got an opinion on the Eagles-Bucs on Sunday in the Wild Card.

Here’s what the experts at InsideHook.com think:

Josh Appelbaum’s Assessment: The Eagles (9-8 SU, 8-8-1 ATS) have been playing pretty well, going 6-2 over their last eight games to secure a Wild Card berth. Meanwhile, the Bucs (13-4 SU, 9-8 ATS) tied the Packers for the best record in the NFL and Brady is +850 to repeat as a Super Bowl champion. This line opened with Tampa Bay listed as an 8.5-point home favorite. The public is rushing to the window to lay the points but the line really hasn’t budged. That signals some liability on the road dog Eagles. Tampa Bay will be a popular teaser play (-8.5 to -2.5), which goes through multiple key numbers. I like the under in this game. The total opened at 49 and has fallen to 46. Why? The forecast calls for rain and 20 MPH winds.

Tom Gable’s Guess: This game is a tough proposition for the Eagles. They’ve found so much success this year running the football, but the strength of this Tampa defense is how they defend the run. That means Eagles fans and bettors will have to place their trust in Jalen Hurts’s ability to throw the football. The Eagles are a tough team to figure out. They’re here because of the second half the season. They beat everyone they needed to to get into the playoffs, but there was only one team who finished with a winning record that they beat. They are optimistic they’ll get running back Miles Sanders back as he’s been out with a broken hand. When these two teams met earlier, the Eagles got a backdoor cover but were never really a threat to win that game. The strength of this Eagles team is their offensive line and Hurts should have decent protection in this game. Look for them to try to exploit Tampa over the middle and for tight end Dallas Goedert to have a big game for the Eagles. If they can do that, I think the Eagles can stay within the spread. I’m going to take the points here with Philly.