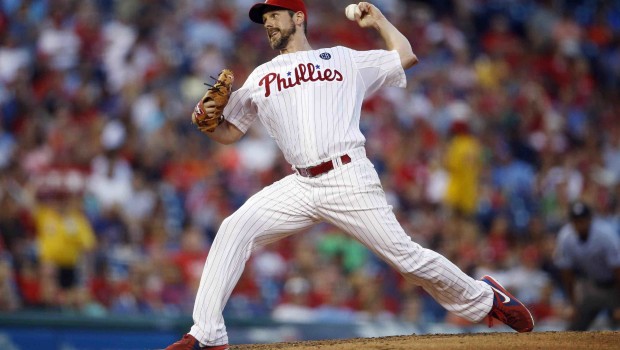 WHY WOULD ANYONE WANT TO TRADE FOR THE PHILS' CLIFF LEE?

Is this all Cliff Lee has to offer?

In his final outing before Thursday’s non-waiver trade deadline, Lee went five innings and allowed three runs before Antonio Bastardo surrendered the go-ahead run in the 10th inning of Phillies’ 10-6 loss against the D-backs at Citizens Bank Park.

Thanks in large part to an early offensive outburst by the Phillies — every starter had a hit by the fourth inning on Saturday — Lee exited in a 6-3 ballgame, but Philadelphia’s offense failed to cushion the lead, and the bullpen couldn’t protect it.

Lee was making his second start since returning from a left elbow strain that kept him on the disabled list for two months. In his first start back on Monday, he faced similar issues with his location, allowing six runs in his 5 2/3 innings while surrendering a career-high-tying 12 hits.

The veteran southpaw posted a 3.18 ERA in the 10 starts he made prior to landing on the DL.

“Obviously, I would have liked to come back and pick right up where I left off, but I missed two months, so there’s going to be a little rust there,” Lee said. “As much as I ran and lifted weights and did everything I did in between, there’s nothing that simulates actually going out there and playing the game. Doing that’s going to get you back to where you need to be.”

The 14 scouts in attendance — many of whom were at Citizens Bank Park specifically to see Lee — were kept busy early on. Lee needed 33 pitches to get through the first inning, as his uncharacteristic command issues were on full display. But he did well to limit the damage to a single run, and returned in the second with an eight-pitch inning.

Lee couldn’t sustain that level of efficiency, however, and labored through the next two frames, allowing a single run in each.

His divergence from form was perhaps no more evident than in the top of the third, when he surrendered a home run to Martin Prado on an 0-2 count, and then walked Paul Goldschmidt on four pitches in the ensuing at-bat.

A lot of borderline pitches that were called as balls led to an inflated pitch count and an early departure for Lee.

“Elbow is a nonissue at this point,” Lee said. “It’s just a matter of getting honed back in and getting to where I’m locating better. That’s what I do and I’m always trying to improve on it, but the past two games haven’t been even close to what I want it to be. Today wasn’t that far off, but I just threw way too many balls, period.”

A few of the scouts in attendance were in Philly to see another popular trade candidate, Marlon Byrd, who gave them something to write about as well. Philadelphia’s $16 million offseason acquisition hit his 20th homer of the season in the third inning, a solo shot that made him one of just five National League players with at least 20 home runs.

Cody Asche added a two-run homer, while Jimmy Rollins, Chase Utley and even Lee had RBI hits for the Phillies.

But the four-run lead wouldn’t last. Justin De Fratus allowed a two-run double to Prado in the sixth, and Ender Inciarte came through with a game-tying RBI off Mario Hollands in the seventh. Bastardo entered in the 10th and gave up a single and a double with one out before Prado drove in his fifth RBI of the night on a sac fly. Then, after Goldschmidt intentionally walked, Nick Evans launched a three-run homer for the game’s finishing touches.